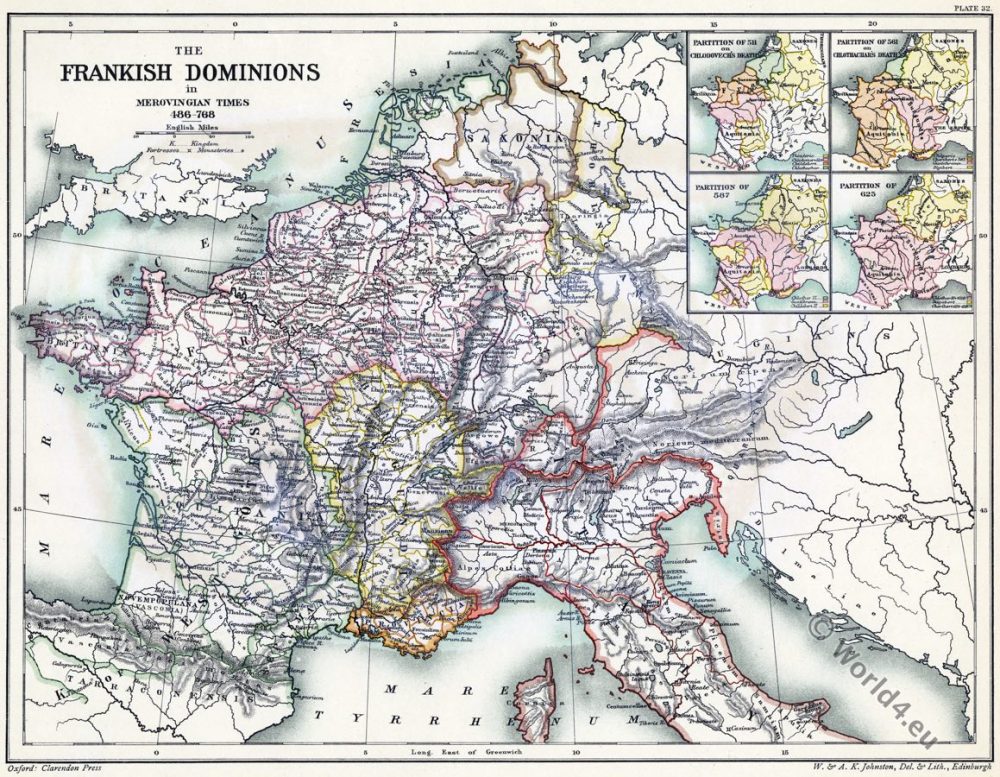 The Frankish dominions in Merovingian times (486-768).

The Frankish dominions in Merovingian times (486-768).

Historical atlas of modern Europe from the decline of the Roman empire.

THE name of the Franks first appears in the map, dating from the third century, which is known from a former possessor as the Table of Peutinger. It was then applied to the Chamavi who dwelt on the Lower Rhine. Their settlements between the Rhine, the Meuse, and the Scheld, were on Roman ground: they were received by the Emperor Julian as soldiers into Roman service, and they came to form the garrison of the Imperial frontier. They consisted of a number of small tribes, under independent rulers, and two of these tribes, the Salians and the Ripuarians, acquired such a preponderance that they have usually been spoken of as though each separately, or the two together, possessed the characteristics of a single nationality.

In the fifth century the Franks appear in friendly alliance with the representatives of Roman power in northern Gaul, AEGIDIUS and his son SYAGRIUS, who succeeded him in 464; but when in 476 the Western Empire was suppressed it is possible that the Franks deemed Syagrius to be attached to the upstart kingdom of Odoacer, and preferred themselves to support the Emperor ZENO.

At all events, the Salian CHLODOVECH (called by the French Clovis), who succeeded his father Childeric in 481, and whose seat was at Tournay, is described as holding the administration of the Roman province of Belgica Secunda (1). In 486 he defeated Syagrius at the battle of Soissons, and not only acquired his dominions, but was also joined by the Roman army quartered in Gaul (2). In 491 he subdued the Thoringi, a race settled on the left bank of the Lower Rhine, and by degrees brought under his sway the various tribes of the Salians, which had hitherto been independent of the ruler of Tournay; but the chronology of these minor conquests is quite uncertain. In 496 Chlodovech overthrew the Alamans at a battle the site of which is unknown-for its identification with Zülpich (Tolbiacus) is generally rejected-and subjugated their territory. This is the geographical situation indicated by the colouring of the accompanying map.

In 507 Chlodovech made war against the Visigoths, who held the south of Gaul as far as the Loire, and beat them at Vouille (Vogladensis, not Vouillon). In three years he conquered the land down to and even beyond the Garonne. Last of all, it seems, he turned his forces against his previous allies the Ripuarian Franks (about Cologne), and possessed himself of their country. The commanding position attained by Chlodovech, and his status as the representative of the Roman tradition in Gaul, were recognized by the proconsular dignity conferred upon him by the Emperor ANASTASIUS about 508.

His attempt, however, to gain Provence was frustrated by the intervention of the Ostrogoth THEODERIC THE GREAT, who secured it for himself. 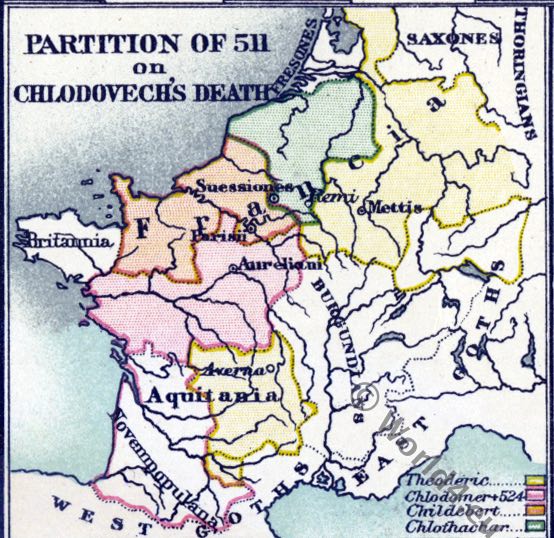 Partition of 511 A.D. on Chlodovech’s death.

On the death of Chlodovech in 511 his kingdom was divided among his four sons. The practice of partition continued for generations to be the prevailing rule of the Frankish dynasty. Each king ranked equally as King of the Franks, and the death of anyone of them commonly involved a new partition. The boundaries of the successive rearrangements are exceedingly confused, the two normal principles being that each king should have his seat at one of the central cities of Soissons, Paris, Orleans, and Metz (or Rheims), and that the king who ruled over what may be called for distinction the German regions should also hold a detached territory dependent upon Auvergne (Arverni, known at a later date as Clermont-Ferrand). 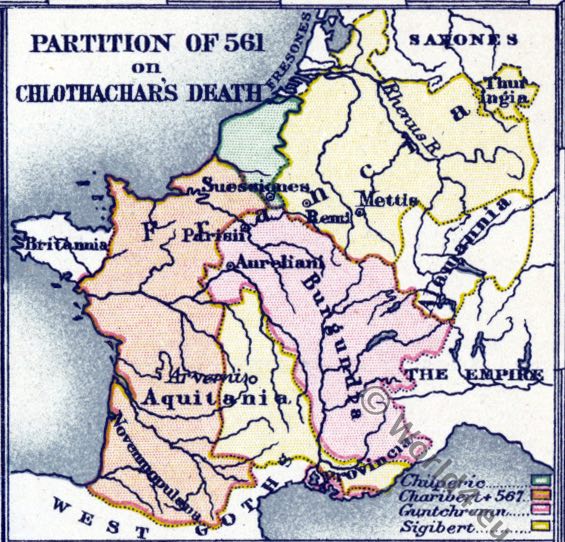 Partition of 561 A.D. on Chlothachar’s death.

Four inset maps indicate the partitions of 511, 561, 587, and 625. These have been taken from M. A. Longnon’s Atlas, but although they are the result of minute topographical researches, the details of which will be found in this scholar’s’ Geographic de la Gaule au sixième siècle’ (Paris, 1878), a large number of points in the delimitation remain obscure. M. Longnon considers it probable that the portion of the south-west of Gaul which is distinguished by a pink outline in the map of 511 was held jointly by the four brothers; but that this arrangement, which may have been dictated by the value of the Bordeaux vineyards, did not necessarily involve the extreme south-west, which was possibly held by the eldest, THEODERIC. The details, however, of the Frankish conquest of this last territory- Novempopulana -are altogether uncertain, and the whole of it was not finally surrendered by the Visigoths until 567. 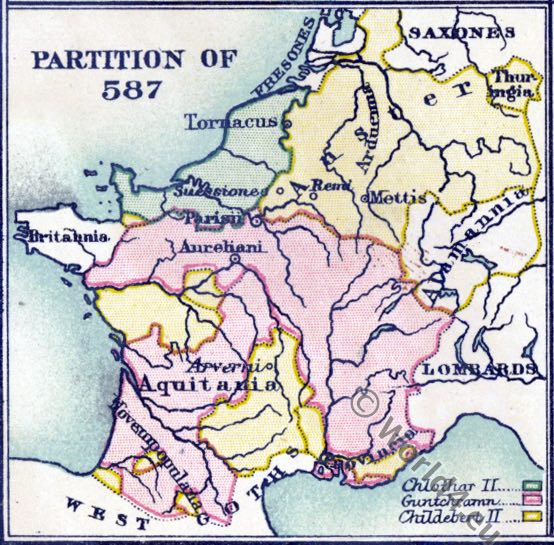 In 531 Theoderic extended his German possessions by the conquest of the Thuringians, but whether he annexed their whole country, or whether the tract lying north of the river Unstrut (Onestrudis) did not fall into the hands of the independent Saxons, cannot be positively stated. In 532 the younger brothers, CHLOTHACHAR and CHILDEBERT, subdued the Burgundian kingdom after a battle at Autun (Augustodudum), and afterwards divided it among themselves and THEODEBERT the son of Theoderic, who died in 533.

Note:  Gauls. The inhabitants of Gaul before the Roman conquest.

In 536 the Franks occupied Provence, but it was long divided between two of their rulers; one holding Avignon and a strip reaching to the coast eastward, and the other the inland tract and the greater part of the sea-board of the country. On the east, Bavaria owed some sort of allegiance to the Franks from the middle of the sixth century, but the Bavarian Duchy was not made really subject until the eighth.

For a short time after 539 Theodebert gained some possessions in the north of Italy, but these were lost by his son Theodebald in 553. In the last quarter of the sixth century, again, the Franks of Burgundy made a transient addition to their territory by the conquest of the districts of Aosta (Augusta) and Susa (Sigusium), on the Italian side of the Alpine passes of Mount St. Bernard and Montgenèvre (before 588). With this exception, by the middle of the sixth century the Merovingian dominions had grown to their full compass; for in spite of more than one attempt the kings never succeeded in conquering Septimania from the Visigoths, nor in extending their sway beyond the Pyrenees. Early in the eighth century the Visigoths lost Septimania, not, however, to the Franks but to the Mohammadan invaders from Spain. It was acquired by the Franks between 739 and 759. 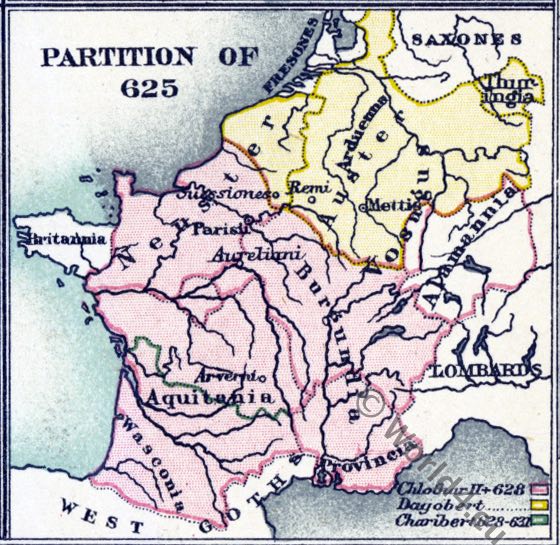 Brittany after the death of Chlodovech acknowledged the Frankish supremacy, but never formed a real part of the kingdom.
The map showing the partition of 625 displays CHLOTHAR II’s kingdom, with the Austrasian regions handed over to his son DAGOBERT. On Chlothar’s death in September, 629 (3).

Dagobert united the whole land under his rule, but granted the south-west of Gaul (indicated by a green line) to his brother CHARIBERT II, who died in the following year.

In spite of continual conquests and reconquests, partitions and readjustments of territory, made for the most part without any regard for geographical considerations, the Frankish realm tended to fall into three, and then into two, well-marked divisions: Austrasia, centring in the original Ripuarian land; Neustria, in the Salian; and Burgundy. The attachment of the remoter districts still fluctuated; but Burgundy was, more commonly than not, ruled by the same king as Neustria. In the seventh century the power of the Mayors of the Palace prevailed over that of the kings, and by the victory of Testri in 687 the Austrasian Mayor PIPPIN succeeded in establishing his authority over Neustria. From that date the ascendency of Pippin was assured; he became Mayor of the entire kingdom, and his son CHARLES, known in later times as Charles Martel (or the Hammer), ruled, though without the name of king, until his death in 741.

During the decline of the Merovingian power the local forces in the extremities of the kingdom were able to assert themselves. In 641 or 642 the Thuringians cast off the Frankish allegiance; and from the beginning of the eighth century the growing strength of the dukes of Aquitania, while they never succeeded in gaining independence for any length of time, proved a constant cause of difficulty to the Frankish rulers.

[The principal map is modelled upon that of Dr. Menke.]