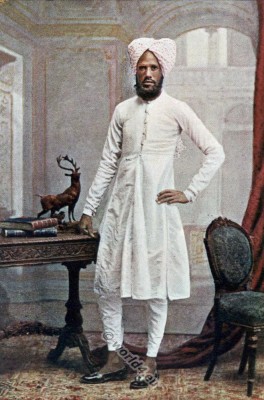 This portrait represents a Mohammedan dressed In the full costume worn by Muslims from the North-West Provinces. It will be noticed that the turban is twisted into a peculiar shape, full at each side and falling below the ears, while the trousers are almost close-fitting to the leg below the knee, and are fastened by buttons from the calf downwards. The boots are of patent leather, and adorned with large silver buckles. The undress costume consists of a small oblong skull cap, and, while no coat is worn, a waistcoat, generally of a gorgeous color, plentifully sprinkled with gold or silver spangles in front and rear, is exposed to view. The majority of Mohammedans to be found in the North-West Provinces are of sturdy build, a fact which is not so noticeable in those coming from other parts of India.
The great Mohammedan festival of the year is the „Muharram,“ (Muharram is the first month of the Islamic calendar. It is one of the four sacred months of the year) and on this and similar occasions precautions are always necessary on the part of the police to prevent a conflict between the Hindus and the followers of the Prophet. The better class natives do not take part in the processions which parade the streets on such days, it being chiefly the rabble who delight in these festivals, which are always a nuisance to the town in which they are held.

It is curious how inconsistent are the English In their government of India. We permit all kinds of native nuisances, obstructions, and din, provided they have for their alleged raison d’etre a “religious prejudice.” We are very strong on the subject of religious prejudices, and wouldn’t for worlds interfere with one in any way whatever. This fact is duly appreciated by the native, who, making a mental note of it, carefully arranges accordingly, and when requested by those presumably in authority to do what does not please him, he replies, with an inward chuckle, that his religious prejudices prevent him from complying. And that settles the matter.
There exists in Bombay (Mumbai), at the time of writing, a native prejudice in favor of carrying, on an open bier, through the public thoroughfares, the corpses of people who have died of the plague. If the body is that of a Hindu it is burnt, and that is doubtless the best method of disposing of it. But when the burning ground is so situated that the bodies can be plainly seen from the road – that road being the one and only drive in the town – and the smoke from the funeral pile blows, charged with the ashes of burnt wood and an abominable odour of charred flesh, into the eyes and nostrils of each and every passer-by, it not unnaturally suggests the thought that the prejudices of the European community against the custom might, with advantage, be also taken into consideration by way of a pleasing change.