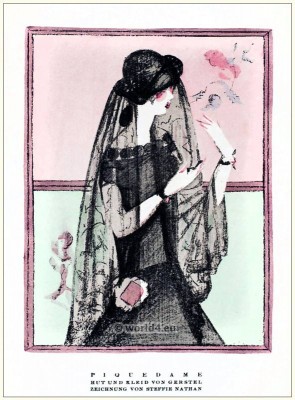 Queen of Spades. Hat and dress by Johanna Gerstel.

Johanna Stein-Gerstel committed suicide on 11 December 1942 together with her husband, the writer Jochen Klepper. The deportation to a German concentration camp was imminent.

Steffie Nathan carries after her marriage to the artist Albert Schäfer-Ast  (1890-1972) the surname ‘Schäfer Nathan’. Steffie Nathan was his second wife. She worked in Berlin as a press illustrator and painter. Employee among others in “The Lady”, “STYL”, “The Owl”; graphics among others in “Young Germany”. Works are among others to the “Robert Gore Rifkind Center for German Expressionist Studies Department.” She created both fashion designs, advertising images, as well as expressionist motifs. In the 30s it came under political pressure to divorce between the couple, as Steffie Nathan Jewess and her husband was politically active against the Nazis. In May 1939 their daughter Susanne came through an organized by the Quakers children transportation to Britain. Steffie Nathan followed her in July 1939. It was a further epistolary contact between the couple.