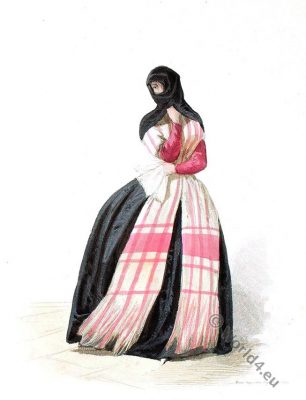 Tapada Lima, was the name that was used to designate the Lima woman in the viceroyalty of Peru and the early years of the Republic. It is called so, because such women cover their heads and faces with comfortable silk shawls they called “saya and mantle”, revealing only one eye. Its use began in the sixteenth century (1560) and lasted until late into the nineteenth century (1860), ie, its use was extended for three centuries or three hundred years and not only confined to Los Reyes, but other major cities in the region. In Lima, the custom remained until late in the Republic, when it was relegated by French fashions in vogue.