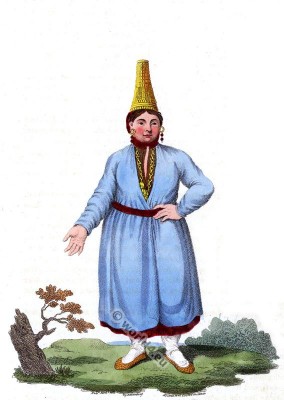 THE Tschermiss are of Finland origin, and have their settlements in the governments of Kazan and Niznei-Novgorod, on both sides of the Volga, but chiefly along the left bank of this river; whence they extend as far as Perm. At the time of the dominion of the Tartars they were tributary to that nation, and dwelt lower down towards the south, between the Volga and the Tanais or Don. They had their Khans, or particular chiefs, even after they fell into the hands of the Russians; but the race of these chiefs became extinct by the death of Khan Adai, a Tschermiss prince of consider-able courage, and much devoted to the crown of Russia. They have now neither princes nor a nobility. They formerly led a pastoral life, but, by degrees, have imitated the manners of the Russians.
The exterior of this people partakes of the medium between the Russians and the Tartars, but the men have neither the fire nor the resolute character of the Russian, and their females are greatly inferior both in beauty and vivacity, though in other respects they are sufficiently agreeable. The Tschermiss are slow, but laborious, stubborn, and suspicious. They reckon neither by years nor months, and have only traditional stories of their ancestors.
The dress of the married women is the same as that of the unmarried, but the former is more decorated. They wear trowsers, and twist linen round their legs in lieu of stockings. Their shoes are made of the bark of trees matted together. When they wish to deck themselves, they wear over the chemise a dress resembling a morning gown, made of coloured cloth. It is generally trimmed with beavers’ skin. Their caps are lofty, and in the form of a cone; they are called Schourki, and are made of the bark of the birch tree, covered with skin, or cloth; they are ornamented with glass pearls, small white shells, and little silver coins. From this cap a fillet descends down the back, about three inches broad, decorated with the same ornaments as the cap.

It is the custom of this people to purchase their wives, and the sum paid for them is called Olou. The common price is from thirty to fifty, but some fetch as high as eighty, and even a hundred roubles. At the celebration of the nuptials, the husband, accompanied by his friends, goes to demand his betrothed bride. As they are preceded by music, they are generally joined in their march by the inhabitants of the villages through which they pass. The bridegroom then deposits the purchase money; he distributes presents to his guests, and the company sit down to a repast prepared for them. On the following day the husband conducts the bride to his own dwelling; and when the company retire, it is customary for them to cast a few copecks into the last goblet out of which they drink, as a present for the new married pair.