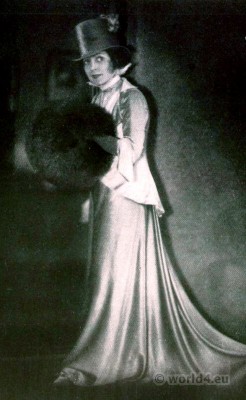 Fritzi Massary (Friederika Masaryk, 1882-1969) was an Austrian singer and actress. She grew up in Vienna as the oldest of three daughters of a Jewish merchant family and received early singing lessons. Richard Schulz engaged her in August 1904 for the Metropol Theater Berlin**. She soon became the figurehead of this theater. She starred in numerous operettas by Paul Lincke and Victor Hollaender. She was the most famous operetta singer of her time, and the female population was based according to their fashionable taste. When she married actor Max Pallenberg, she converted to Protestantism. The flight from the Nazis in 1932 meant the end of her career. She emigrated in 1939 to her daughter in the United States and settled in Beverly Hills Hollywood where she lived until her death. Her urn is on the Forest Lawn Memorial Cemetery in Glendale.

* The Teresina is an operetta in three acts by Oscar Straus based on a libretto by Rudolph Schanzer and Ernst Welisch. The work was premiered on 11 September 1925 at the German Artists Theater in Berlin.

** The Metropol theater was opened in 1898 by Richard Schultz in the Behringstr. 55-57 (today’s home of the Komische Oper). In the “Golden Twenties”, the Metropolitan has developed into a world-famous operetta stage, which also played new music from the USA with original ensembles. On the program were revues and other works of “light entertainment” with well-known singers such as Lizzi Waldmüller, Richard Tauber and Fritzi Massary. In National Socialism the operation of the Metropol went on as usual, except that Jewish members of the ensemble, as in all German theaters were no longer allowed to occur. In March 1945, bombs destroyed the theater in Behrenstraße down to the auditorium, which was preserved and used since 1947 as the Komische Oper.