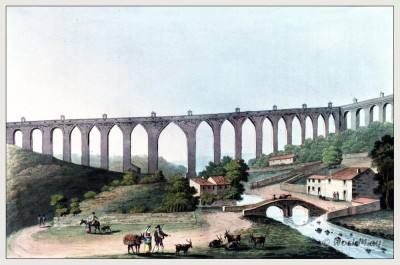 Height of the arch from the ground to the intrados 230 Feet. From the vortex of the arch to the extrados, exclusive of  the parapet 9 Feet. From the extrados to the top of the ventilator 23 Feet. Total height from the ground to the summit of the ventilator 263 Feet. Breadth of the principal arch 107 Feet. Breadth of the piers of the principal arch 28 Feet. Thickness of the piers in general 23 Feet.

The number of arches across the valley is thirty-five; fourteen of which in a range are pointed, the rest semi-circular. Over the arches is a vaulted corridor, nine feet six inches high, by five feet broad, internally. A continued passage runs through the centre of it for the people who attend to keep it in order, and a semicircular channel of thirteen inches diameter on each side, through which the water flows.

Lisbon is supplied with water, which is conveyed by means of this aqueduct, into reservoirs in different parts of the city; from which a laborious class of its inhabitants, chiefly Gallicians, are employed in filling barrels and vending their contents through the streets.