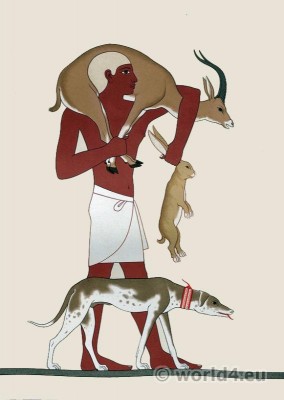 Back of hunting. Necropolis of Thebes.

Ancient Egypt. Back of hunting. Necropolis of Thebes.

Painting: Back of hunting (Necropolis of Thebes – 17th dynasty.) Thebes (ancient Egyptian New Kingdom Waset, otherwise also: Niut or Niut-reset) was an ancient Egyptian city located on the Nile in Upper Egypt, which in Homer’s Iliad (9 singing, verse 383) called the Thebes of the Hundred Gates; not to be confused with the Greek Thebes in Boeotia as the city of the seven gates, referred by Homer in the Odyssey (11 song, verse 263). The Necropolis of Thebes is located on the west bank of the Nile, were all pharaohs of the New Kingdom, with the exception of Akhenaten, buried. In the ancient Egyptian royal city of Thebes was also the famous Luxor temple district formerly known as the Ipet reset.