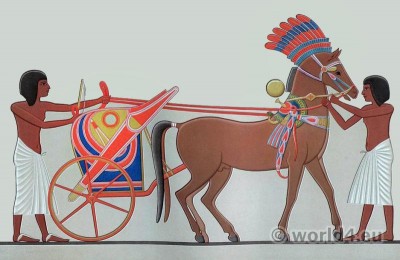 Chariot relating to a prince.

Chariot relating to a prince. (Tell el-Amarna – 18th dynasty.)  Tell el-Amarna, often known simply as Amarna, is an archaeological site on the east bank of the Nile in Middle Egypt, in the province of Al-Minya. It is located about 312 kilometers south of Cairo. With Amarna usually the nearby ruins of the ancient Egyptian capital of King Akhenaten be referred. The place is eponymous for a period of the late 18th dynasty, which is called the Amarna period. The ancient name of the place was Akhetaten (‘Horizon of the Aten “), the actual city probably bore the name of the main temple Per Aton (” House of the Aton “). The artists of Amarna led painting, sculpture and relief art to an unprecedented flowering, with extremely lively, at times even caricaturing, scenes from daily life and a human representation also the royal couple Akhenaten and Nefertiti, in contrast to the solidified abstract and typed archaic art Egypt stood. The art of this period is therefore referred to as the “Amarna art“. Actually Akhetaten was no capital in the modern sense as Memphis or Thebes, but essentially a royal residence and religious center. Due to the use of so-called talatat the construction of the city took about three years. The talatat were specific building material for the Amarna period. They have a standard size of about 27 x 27 x 54 cm (ie ½ x ½ x 1 Egyptian cubit). The comparatively small size facilitated the rapid construction of temples, but also the subsequent demolition of these buildings. The talatat were later sought-after building material, particularly for foundations and fillings of bivalve walls and temple pylons. The city existed only for a short time. After Akhenaten’s death, the Court of King Tutankhamen moved to the ancient capital of Memphis and Akhetaten was then never resettled on a large scale.