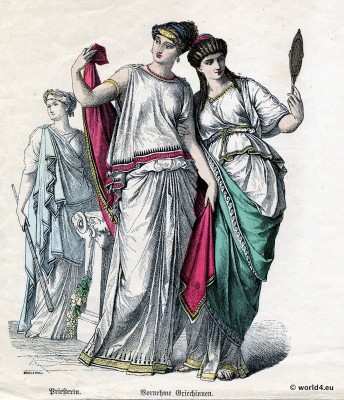 Priestess (visionary) and nobility in chiton.

The resulting folds by pulling down the chiton over the belt was called Kolpos.

Women were active not only as the Pythea as an oracle. Among others were the duties of citizens in Athens the ablution of the statue of Athena and the weaving of the peplos (robe for the statue).
At the Artemis sanctuary in Brauron girls served as altar attendants and they carried the sacred olive branches in procession to the temple of Apollo Delphinos to name just a few specific tasks.
Especially among the celebrations in honor of Demeter and Kore, women played a prominent role. Particularly noteworthy are the festivals which were exclusively reserved for women (Halos in January, Skira in July and Thesmophoria late October). The most important festival, the Thesmophoria, took a total of three days. On the first day, the women built the sanctuary and provisional shelters, on the second day they fasted and on the third they celebrated extensively. The victims, who were brought during this time (for, example, small piglets) were mixed later with the seed.
In these festivals, the women could represent as a group and took over responsibility regarding the agricultural work, as the harvest yields were backed up by the cultic activities. Also at the cult of Dionysus, the women played an important role. The best example is Olympias, the mother of Alexander the Great.

Olympias (Around 375 BC in Epirus; † 316 BC in Pydna.) was a princess of the tribe of the Molossians. She was a daughter of King Neoptolemus I of Epirus. Around 357 BC, she married the Macedonian king Philip II., and became the mother of Alexander the Great. Religious eccentric she was a devout member of the orgiastic snake-worshiping cult of Dionysus and joined the orgiastic celebrations in honor of the God already in her home country Epirus as a dancer and a Bacchante on. According to Plutarch took these rites also tamed snakes part that should be touched and writhed around the ivy crowned maenads. Archaeological excavations in Dodona confirmed the serpent cult of the local ancient inhabitants, and in Pella there were signs that the women Dionysus worshiped. Olympias had its own cult snake. Olympias played in the education of her son a significant role and may have influenced him in his religious views.