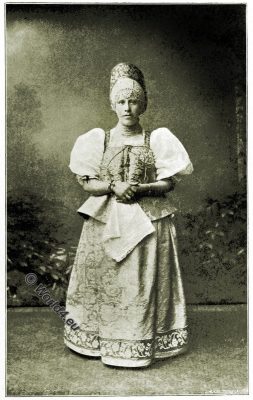 Peasant girl of the village of Kieg island.

Russian peasant girl of the village of Kieg island, Arkhangelsk.

Source: Русскій сѣверъ. Путевыя записки. A Russian Province of the North by Aleksandr Platonovich Engelhardt. Governor of the Province of Archangel. Translated from the Russian by Henry Cooke. Publisher: Archibald Constable & Co., Westminster 1899.

Note:  A Woman of Lapland in traditional dress.