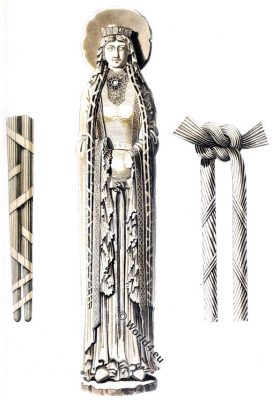 also Chrodechild, Chrodichild, Chrodechilde, lat. Chrodigildis. The name forms Chlothilde, Clothilde, and Klothilde, among which she are read in late medieval and modern literature, are not authentic. She was the second wife of Chlodwig I and by this marriage queen of Franks. As holy Clothilde or Chlothilde she is venerated by the Church.

HAVING already given the history of this statue along with that of its companion, little remains to be said about it. The costume of the Frankish queen is simple; and the girdle with the pendent band before, is common in the regal monumental effigies of the twelfth century.

The manner of binding up the long hair is remarkable, and may be intended for a traditional memorial of this distinguishing mark of royalty in the early ages.

The figures at the end of the present article represent chessmen of the twelfth century, carved in bone, and illustrate one of the favourite games of the princes of that remote period. One of the pieces here given represents a king. We meet with various early allusions to the game of chess, which seems to show that it was a favourite amusement of the Northmen, and that it was introduced by them into France and England. 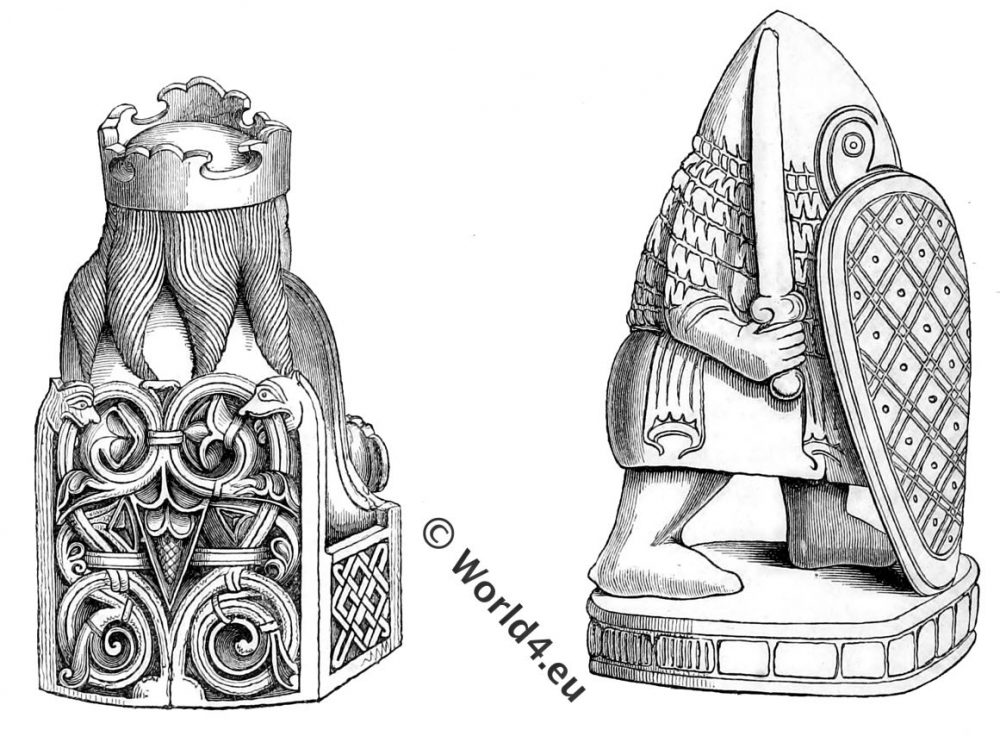 Chessmen of the 12th century

Our king forms one of the large collection of chessmen discovered in 1831, in digging in a sandbank, in the parish of Uig in the Isle of Lewis (North of Scotland). It consisted of sixty-seven pieces, comprising six kings, five queens, thirteen bishops, fourteen knights, and ten rooks (or, as Sir Frederick Madden terms them, warders), forming the materials of six or more sets. The costume of these figures is very clearly defined.

The kings are represented with large spade-shaped beards and with moustaches; their hair falling in plaits over the shoulders. They have low trefoil crowns on their heads; and their dress consists of an upper and an under robe, the former of which (the mantle, clamys) is thrown in folds over the left arm, and left open on the right side as high as the shoulder, where it is fastened by a clasp. Each of the figures holds a sword with both hands across his knee.

They sit on chairs of a square form, with high backs, which are very elegantly carved. The queens are similarly seated in chairs, and crowned: one of them holds in her hand a drinking horn, a peculiar attribute of the queens among the northmen, it being her office to serve the ale to the warriors of her husband’s court. Of the bishops, some are seated, and others in a standing posture. The knights are on horseback; while the rooks represent warriors on foot, with the singular kite-shape shield which was used in the twelfth century: one of them is cut out of a whale’s tooth.

Sir Frederick Madden, who has given a detailed and learned account of them, with many figures, in one of the volumes of the Archaeologia, believes that they were made in Iceland. The originals are now in the British Museum.

The other figure is taken from a chess-man of the same material preserved in the Cabinet of Antiquities at the Bibliotheque du Roi in Paris. By comparison with those in the British Museum it would appear to be a rook.

It represents a foot soldier, resting his kite-shaped shield before him on the ground. In the Cabinet d’Antiques there are with it four mounted knights, evidently belonging to the same set, with others which are different. They were, we believe, formerly in the Tresor at the abbey of St. Denis, and were represented as the remains of the “jeu d’echees du Roi Charlemagne.” But one only of that original set now remains, which is undoubtedly authentic, and bears a Cufic inscription. The monks seem to have added from time to time other ancient pieces which fell into their hands, to supply the defects of the set which had belonged to Charlemagne.

The initial letter at the beginning of the preceding page is taken from an illuminated Bible of the twelfth century, preserved in the Public Library at Rouen. 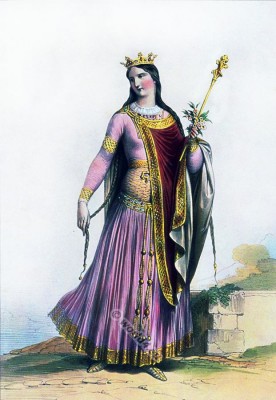 The later canonized by the Church Clothilde (475-545), which is also known under the name Clotilda, Clotild, Rotilde or Chroctechildis, was the second wife of the Frankish King Clovis I.
Clotilde was born at the Burgundian court of Lyon as the daughter of King Chilperic II. of Burgundy and his wife Caretena. Clotilde was brought up in the Christian Catholic faith, and was famous in her lifetime for her charity. In her endeavor her husband, King Clovis I. also converted to Catholicism and was baptized by Bishop Remigius in Reims.

(The name forms Chlothilde, Clothilde, and Klothilde, among whom they are read in late medieval and modern literature, are not authentic.) 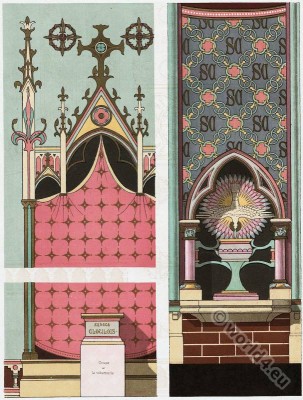 This plate and the following are from the work on the mural paintings of the Church of our Lady in Paris, drawn by Maurice Ouradou (1822 †1884), after Eugène Viollet-le-Duc’s (1814 †1879) cartoons.
Both contain fragments of Saint Clothilde Chapel, at the tenth of the execution. It is a piece of good fortune for the an example of mural pictures composed and executed in such a fashion and which caused quite a sensation when exposed to the public appreciation. 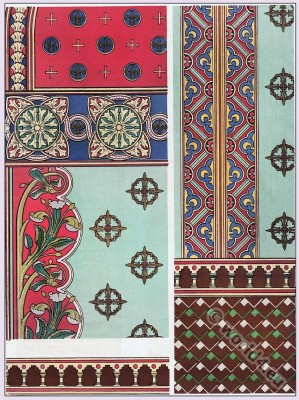 Till the present day, in point of mural paintings in the style of the XIIth and XIIIth centuries, generally but servile copies or imitations were to be seen, wherein the eclat of colours did not dare, so to say, to show itself : dull and pallid tones seemed in preference adopted. The paintings of Our Lady’s show, on the contrary, the most vivid tones artistically mixed together, opposed to each other, and producing a general effect the most harmonious and best combined.