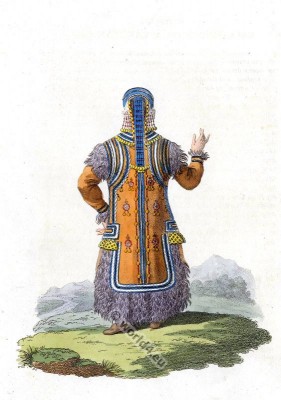 Back Figure of a Yakutan Girl.

Back Figure of a Yakutan Girl, Sakha traditional folk dress 1803.

Front Figure of a Yakutan Girl

THE most learned and revered of the Yakutan Aiouns, or priests, are those who can remember the names of the greatest number of divinities; but they are more indebted for the consideration they enjoy to their powers of magic, their tambour, and the oddity of their dress, than to their sacerdotal functions. It is not unfrequent for the females to exceed the priests in the arts of their profession. ” We sent,” says Gmelin, in his Journey into Siberia, ” for a female magician, who, though in the flower of youth, surpassed the most celebrated sorcerers. She assured us, without the smallest hesitation, that she had carried her art to such a pitch of perfection, that, by the assistance of the devil, she was able to thrust a knife into her body, without receiving the slightest injury. Her youth, vigour, and activity, rendered her superior to her companions in her contortions, and her imitations of the howling of bears, dogs, cats, &c. She called upon the spirits of the air and earth, affected to see and converse with them, and assured us that she had received the most certain answers to all her queries. She then called for a knife, and pretended to thrust it with much violence into her body. I was desirous of applying my finger to the spot, but, perceiving this, she informed us that the devil would not, this time, obey her, and begged us to wait till the morrow. To our utter surprize she made her appearance at the hour appointed, stabbed her-self in our presence, withdrew the bloody knife, and cutting off a small piece of the membranous fat, actually roasted it on the fire and eat it. The Yakuti, who happened to be present, expressed their astonishment by their gestures, and an exclamation peculiar to themselves. They appeared very much alarmed for her safety; but, in the course of a few minutes, she walked about as if nothing had happened, which greatly increased the admiration of the Yakuti. She afterwards applied a plaister to the wound, and bound it up with rags and the bark of the birch tree. Before we left her, she acknowledged that, till the present moment, she never had driven the knife into her body, and that it was her intention to have deceived us, as she was wont to do the Yakuti; but perceiving that we observed her too narrowly, and having learnt from her parents that if she were to thrust the knife slightly into the belly the wound would not prove fatal, provided she eat a small piece of her own fat, and bound up the Wound in the manner above mentioned, she resolved upon doing so, in order that we might not consider her an impostor.”