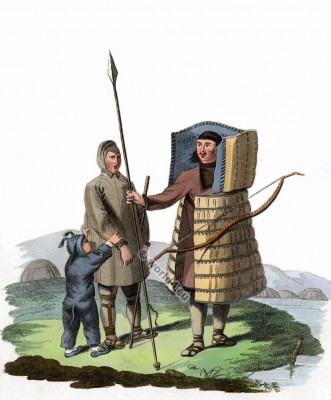 Armed Tschutzkian with a Woman and child

An armed Tschutzkian with a Woman and Child.

THE Tschutski, dwelling in the interior, and in the vicinity of the wandering Koriaks, are rich in rein-deer; but those who inhabit the borders of the sea, and the two coasts of the Cape to which they have given their name, maintain none of those animals. It is principally the latter, who either construct their habitations under ground, or take up their abode in caverns formed by nature in the bosom of the mountains. They live by hunting the wild rein-deer, and by pursuing, in their canoes, the whale and other sea monsters.

Such is the mode of life which these people are obliged, of necessity, to follow; but it is avarice alone that induces the Tschutski pastors not to ameliorate their condition. On no account would they kill a rein-deer for their own subsistence, and they never partake of the flesh of this animal, unless it happened to die by accident or illness. They live upon the produce of their chase and fisheries, and upon the herbs and roots which their females collect.
Water is their only beverage, and, like all their neighbours, they mix with it the juice of the moukhomore, in order to bring on a state of intoxication. As this fatal plant is rarely to be met with in Tschutski, the inhabitants receive it of the Kamtschadales, in exchange for the skins of the rein-deer.
Their canoes resemble those in use among the Greenlanders. The body. is formed of whale’s ribs, and is covered over with the skins of the sea-calf. Without waiting, like their neighbours, till the waves shall cast the dead bodies of the whale upon their shores, they put to sea in pursuit of those animals, in canoes capable of containing from eight to ten men. It is common for several parties to set out at the same time in quest of the same object.