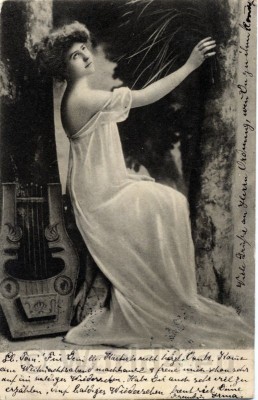 Depiction of a woman in a so-called reform dress. These clothes were to prevail and remained an episode of the early 20th century fashion history. The background was a reform movement, which for an exemption from social constraints and, consequently, against the health damaging fashion, for example, the corset, pleaded.
Monte Verita at Ascona in the Ticino, was a stronghold of the movement. Founded by pacifists and reformers Gusto Gräser, it became a rallying point for the former alternative movement. Mary Wigman, Hermann Hesse, Erich Mühsam, Emil Jannings, and Isadora Duncan, just to name a few, were connected with this place.
On this postcard, the woman is presented in manner of a Greek tunic. But what coincides with the above-mentioned epoch.
By the prudery of the society of that time, the classic antique was used as a model for a clothing Reformation.