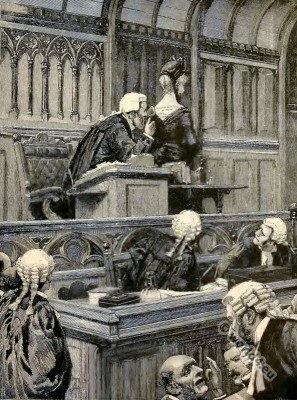 Augusta in Court from the novel Mr. Meeson’s Will.

AUGUSTA Smithers, upon whose back has been tattooed Mr. Meeson ‘s will, is obliged to display it in court.
“Poor Augusta colored up, and her eyes filled with tears as she slowly undid the dust-cloak which hid her shoulders (for, of course, she had come in low dress). She took off the cloak and the silk handkerchief beneath it, and stood before the court dressed in a low black dress.
“‘I am afraid that I must ask you to come up here,’ said his lordship.
Accordingly she walked round, mounted the bench, and turned her back to the judge in order that he might examine what was written on it. This he did very carefully, with the aid of a magnifying glass, referring now and again to the photographic copy which Doctor Probate had filed in the registry.

Henry Rider Haggard 1856-1925, was a British writer and representative of the English adventure novel of the 19th century.