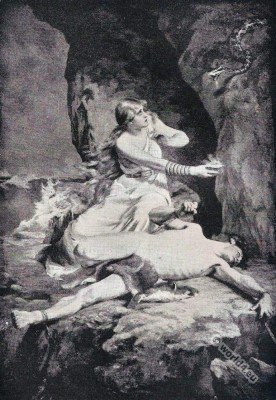 WHEN the gods had captured Loki they bound him to the rock, and Skadi hung a venomous serpent above his head that dripped poison on his face from its fangs. But Loki’s wife Sigyn holds a cup under the serpent’s bead, and empties it when it is full. As she pours out the poison Loki shrinks, and the whole earth trembles. There must Loki lie bound until the Day of Doom.”

Sigyn is a goddess from Norse mythology. Her name means victory bringer. She is the wife of Loki, with the share she has the son Narfi, and is a symbol of marital fidelity. Sigyn is mentioned in the Elder Edda (Völuspá 35), where they appear as sitting at her shackled husband Loki. Loki (also Loptr, Hveðrungr) is a character from the Edda poetry of Snorri Sturluson. Loki is one of the gods Aesir, although he is the son of jötunn, a giant. He is the most versatile of all the gods, but also the one with the most negative characteristics. On the one hand it helps the gods, on the other hand he also played tricks on them and deceives them. He makes use of his ability as a shapeshifter use and appears, for example, in the shape of a salmon or a fly. Due to this ambivalent role he is often interpreted as a trickster figure.