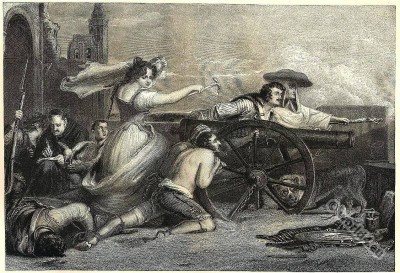 Augustina, the Maid of Saragossa

Her lover sinks-she sheds no ill-timed tear;
Her chief is stain=-she fills his fatal post;
Her fellows flee-she checks their base career;
The foe retires=-she heads the sallying host.

Childe Harold’s Pilgrimage is one of the best known and most successful works of the British poet Lord Byron. The epic poem was published from 1812 to 1818.
The title goes to the medieval word “childe” (squire) back for a young candidate for knighthood. The work, a long narrative poem describes the travels of a young man looking out of disappointment on his life of luxury distraction in foreign countries. It brings the melancholy and disappointment expression, which was felt by a generation that was the Revolutionary and Napoleonic Wars tired.

Raimunda Maria Agustina Saragossa i Domènech (1786-1857), called Agustina de Aragón or Agostina of Zaragoza, was a Spanish independence fighter during the Napoleonic occupation. She fought first as a civilian and was subsequently included in the Spanish Army. She became a symbol of the Spanish War of Independence and served as a subject for painters and writers.

Note:  The Lantern of Diogenes or Choragic Monument of Lysicrates at Athens.

Free eBooks: The works of Lord Byron in 13 volumes.