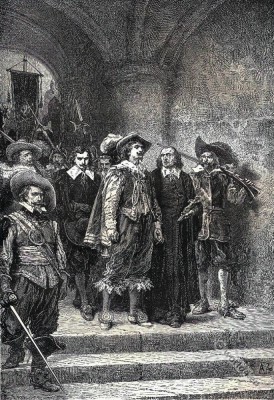 Cinq Mars and De Thou led to Execution.

Cinq Mars and De Thou led to Execution.

HENRY D’EFFIAT, marquis de Cinq Mars, was a member of a noble French family. Born in 1620, he was made grand equerry of France when only nineteen. For some time he was a royal favorite, but Richelieu took a dislike to the young man and employed means for his downfall. He was accused of conspiring against Louis XIII., and, with his friend De Thou, was executed in 1642.

“An old man with a tonsured head walked with difficulty, sobbing violently, supported by two young men of engaging appearance. The one on the left was dressed in black; he was grave, and his eyes were cast down. The other, much younger, was attired in a striking dress; a pourpoint of Holland cloth, adorned with broad gold lace, and with large embroidered sleeves, covered him from the neck to the waist, somewhat in the fashion of a woman’s corset; the rest of his vestments were of black velvet; gray boots with red heels, to which ‘were attached golden spurs, a scarlet cloak with gold buttons, all set off to advantage his elegant and graceful carriage and figure; he bowed right and left with a melancholy smile.”

Alfred de Vigny (1797-1863) was a French writer. He is one of the more important French Romantics. He came from a noble family damaged by the revolution. His childhood and teenage years he spent in Paris from 1798, partly in current Elysée Palace, who was then tenement. He attended the Lycée Bonaparte (now Lycée Condorcet). In 1826, he successfully brought out the novel Cinq-Mars. This story of the same name, 1642 beheaded noble conspirator against Richelieu is the first French historical novel in the new style of Walter Scott (Relics and antiquarian treasures of Sir Walter Scott).