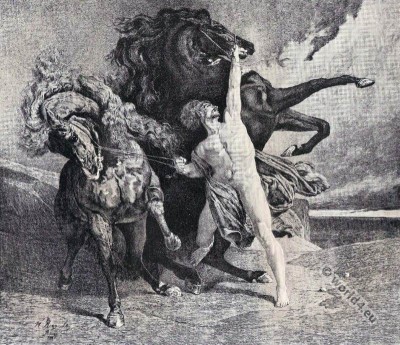 AUTOMEDON was the son of Diorus, and the charioteer of Achilles.

“Then he (Patrocles) called, to yoke with speed
The steeds, Automedon, whom he esteemed
Next to Achilles, the great scatterer
Of armies; for he found him ever firm
In battle, breasting its shock.
Automedon led forth to take the yoke
Xanthus and Balius, coursers that in speed
Were like the wind. Podarge brought them forth
To Zephyrus, while she, the Harpy, graced
By ocean ‘s streams. Upon the outer side
He joined to them the noble Pedasus,
Brought by Achilles from the captured town
Where ruled Eetion. Though of mortal stock
Well might he match with those immortal steeds.”

Automedon was killed at the fall of Troy.