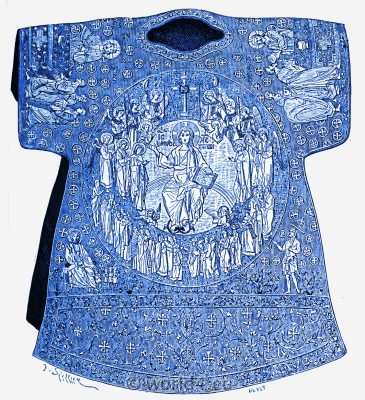 Byzantine Dalmatic, said to have belonged to Leo III., but probably dating from the Twelfth Century, preserved in the Treasury of St. Peter’s at Rome. Upon this garment, which is of dark-blue silk, are several designs embroidered in gold and colours. The most remarkable is one upon the front representing Christ in his glory. Seated upon a rainbow, with his feet upon two circles of fire and the right hand stretched out, he holds in his left the New Testament, which is open at the following passage: “Come unto me, ye chosen of my Father.” Above his head is seen the cross with the crowns of thorns. Around him is a choir of angels, the Virgin, the saints, David and Solomon, the bishops and the religious orders; below, to the right and to the left, St. John the Baptist, and Abraham receiving the souls of the just; above, on the two shoulders, Jesus is giving the Holy Communion to tho Apostles, the wine being administered on one side and the bread on the other.