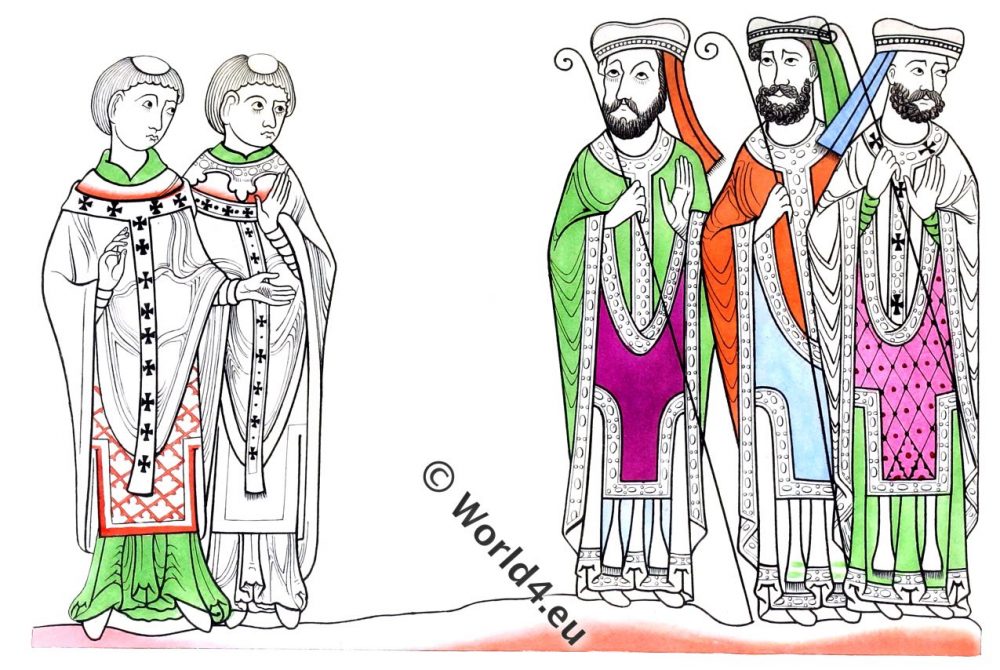 ECCLESIASTICS OF THE TWELFTH CENTURY. 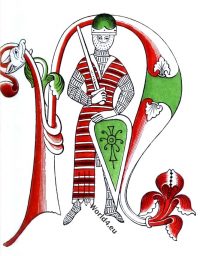 NO class of figures occurs so frequently in the illuminations of our earlier manuscripts, as those of ecclesiastics of different grades; and as the older illuminators were almost exclusively monks, we are justified in concluding that none are represented more accurately with regard to their costume and other characteristics.

Our plate contains some very good figures of prelates of the earlier half of the twelfth century. They are taken from a series of curious scriptural illustrations accompanying a copy of the early Anglo-Norman version of the Psalter, in MS. Cotton, Nero C. IV., in the British Museum. This manuscript was probably written about the middle of the twelfth century, possibly a little earlier. The bishops, who are in their full dress, are remarkable as representing specimens of the low formed mitre which was characteristic of the earlier pontifical costume.

These figures, besides affording good specimens of costume, are remarkable as embodying a little caustic satire on some of the ecclesiastics of the day. The particular illuminations from which they are taken compose a representation of the last judgment, in four large pages. The two inner pages represent the Deity with his apostles sitting in doom.

The first page of the four contains in the upper part a numerous group of heads of the different classes of mankind, from kings and queens to the lowest orders of the people, and beneath a separate group of whole-length figures of bishops and monks. Above is inscribed in Anglo-Norman, “These shall be at the right hand of God at the judgment.”

Note:  The Franciscan order was marked by the severity of its discipline.

The three bishops on the right hand of our plate are taken from this page. On the fourth page is another group of heads, with whole-length figures of churchmen below, and the inscription, “These shall be at the left hand of the Lord God at the judgment.” This page furnished the two figures on the left hand side of our plate.

In drawing all these figures, the illuminator has shewn considerable skill in depicting the physiognomical characteristics. On the right hand of God, the faces of the kings, queens, and higher orders, are dignified and benign; and all have an air of conscious virtue. The bishops below are unshaven, with serious countenance, and bearing all the insignia of office, as being entirely absorbed in the discharge of their pontifical duties.

The monks in like manner are thin and sedate, shewing by their outward appearance that they kept rigidly the rules of their order. On the other page, at the left hand of the judgment-seat, the physiognomical character of the faces is entirely changed. The male heads, especially those which appear to belong to the lower orders, have features of a diabolical character; the faces of the kings and rulers are dark and gloomy; those of the queens are particularly effective, exhibiting a singular mixture of pride and voluptuousness.

The clergy below are fat and sleek, with voluptuous and gluttonous looks; and some of the ecclesiastical dignitaries, as in the two given in our plate, while they bear their rich garments as objects of pride and ostentation, are without the principal insignia of their office, because they neglected their duties, and are very fat, with their faces closely shaven.

Note:  Baron and Baroness in the Reign of Charles VIII 1493

From what we know from history of the manners of the clergy of the age to which these drawings belong, we can hardly avoid believing that the illuminator intended to depict some of the sleek worldly ecclesiastics of his time.

The handsome pastoral staff, of the twelfth century, of which the upper part is given on the preceding page, is preserved in the collection of Monsieur Duguay, at Paris. It is of copper gilt, and elegantly enameled.
Our initial letter, which affords a curious illustration of early armor, is taken from a foreign manuscript in the possession of the Hon. Robert Curzou, Junior. The Manuscript appears to have been written also about the twelfth century, or perhaps a little earlier.