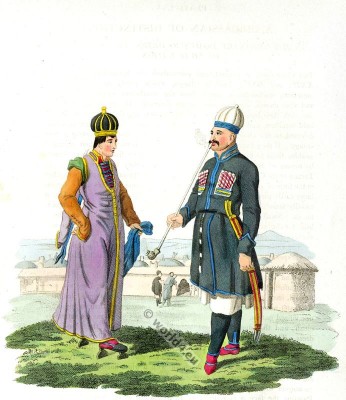 A Circassian of distinction in his ordinary Dress, and a Princess of that Nation.

A Circassian of distinction in his ordinary Dress, and a Princess of that Nation.

The Cireassians in general, and particularly the Kabardians, dwell in villages, which, partly on account of the increasing uncleanliness, partly from the insufficient security they afford, and other causes, are from time to time deserted. On such occasions they demolish their habitations, carry off the timber, together with their house-hold furniture, and burn what they cannot remove. Their attention is next directed to the choice of another convenient situation for erecting a new village. If they happen to settle at some distance from water, their ingenuity enables them to form a canal, which they conduct from the next rivulet, by means of small banks; a practice in which they are as expert as the Tartars of the Crimea. Their houses are built contiguous to each other, either in the form of circles or squares, so that the inner space serves as a common large cattle-yard, provided with only one gate. The residence of the Usden usually stands detached from these circles, and consists of several apartments. Small solitary houses, or rather square rooms, arc, here and there, built for the accommodation of visitors, with a chimney, a small divan, and every other convenience.

The Circassians are, upon the whole, a handsome race of people. The men, especially among the higher classes, arc mostly of a tall stature, and Herculean structure; they are very slender about the loins, have a small foot, and are uncommonly strong in the arms. The women are, indeed, not uniformly Circassian beauties, but, for the most part, they are well formed, have a white skin, dark-brown or black hair, and regular features. A greater number of beauties are, however, to be met with than in any other uncivilized nation. In their villages and houses the Circassians are extremely clean; and this domestic virtue they likewise display in their food and dress. The opposite engraving represents a Circassian Nobleman, and the Daughter of a Circassian Prince, in their ordinary domestic apparel. The females uniformly dress in this style, till they arc delivered of the first child, after which they begin to cover the head with a white handkerchief, drawn close over the forehead, and fastened below the chin. When the females go abroad they wear a species of wooden clogs, to preserve their feet clean. Painting the face is considered as an indication of the want of chastity; but girls are permitted to dye the nails of their fingers with the flowers of the balsamina, which in their language is called Kna.