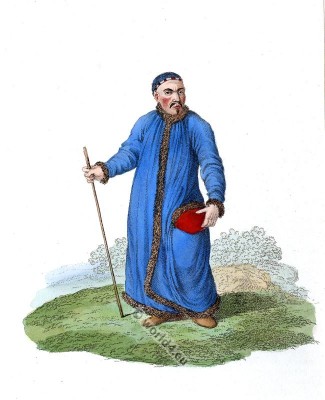 A Bukharian of Siberia.

BUKHARIA is not dependant upon Russia; and if we speak of the Bukharians in this place, it is because a great number of them have been long established in Siberia. They occupy the Tartar districts in Tobolsk, Tara, Tourinsk, and Tioumen, and people, in a great degree, the environs of those towns. They are also to be found in the governments of Orenburgh and Astrachan.
Bukharia, their native country, is situated to the south of the Caspian Sea and Lake Aral. It is bounded by Persia, the north of India, and several small Tartar provinces.

Bukhara, the principal town, rises on the banks of the Syr-Daria. It is not at present in so flourishing a condition as in the year 1220, when it was taken and burnt by Genghis Khan. The conqueror by whom it was destroyed ordered it to be rebuilt, a few years before his decease.
The Bukharians are tall and slender, with small eyes and large ears. In their physiognomy they are thought to bear some resemblance to the Indians. In their dress they differ but little from the Tartars of Kazan. The men wear lofty caps made in the form of a bee-hive. The women have a custom of colouring their nails with the juice of a balsamic plant, which gives to them a yellow tincture. The females of several neighbouring countries are also in the same practice, and particularly the betrothed girls of Astrachan, who are distinguished by this circumstance from the rest of their sex.
The language of the Bukharians is considered as one of the purest and most elegant of all the Tartar dialects. The Bukharians, like all the disciples of Mahomet, strictly observe the laws of the Alcoran; besides which they have also written laws peculiar to themselves. They are frugal in their re-pasts, and their tables are neat and simple. Faithful to the precepts of their religion, they partake of no food forbidden by the Mahometan law, and live much less on flesh than on vegetables. Every stranger is well received in Bukharia. Of whatever country or religion he may be, if he lives peaceably, and is obedient to the laws, he is sure of being protected by them. The Bukharians carry on a traffick with India, Persia, China, Russia, and all the Tartar nations. They assemble in caravans ; and as their affairs sometimes detain them in foreign countries, it not unfrequently happens that they forget their native spot, and never return to it. They cultivate cotton, and manufacture it into rich stuffs. They rear silk worms, and for the purpose of nourishing them, surround their gardens with mulberry trees. Their horses are much esteemed by the Indians, who pay very dearly for them. Their sheep, which they originally received from the Arabs, have much degenerated ; but their coats are as fine as the wool of England. The Bukharians manufacture a fine sort of paper, of cotton and the bark of the mulberry tree.

Note:  The Wife of a Cossack of the Don, and a Girl of Tscherkassk.