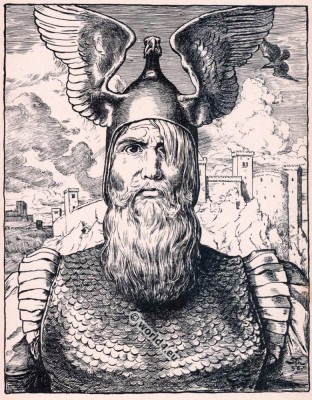 Costume design for Wotan in The Ring Cycle 1879.

Hans Thoma costume designs for the opera The Ring of the Nibelung, opera by Richard Wagner.

Wotan:
God, Nature wicked, man power and ruler of the world, “light albe”, he created the “laws” which are carved in the cut of the World Ash contract spear, and let the gods Valhalla built to consolidate his power. Is also known as Wälse and walker go. At its power politics – he does not respect its own laws – the gods and thus the existing world order will perish.