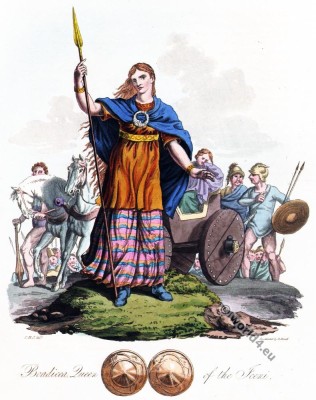 Boudicca also known as Boadicea, or Buddug was a Britannic queen and army leader who in the early years of the Roman occupation of Britain an ultimately unsuccessful revolt (60-61 n. Chr.) was leading. Boudica was the wife of Prasutagus, king of the Iceni, a Celtic tribe on the territory of East Anglia (Norfolk and Suffolk). After the death of Prasutagus the Romans would not accept a woman as a tribal leader, flogged Boudicca publicly and raped their virgin daughters.
In 60 AD. raise the tribes of the Iceni and Trinovantes against the Romans under the leadership of Boudicca. Probably more than 50,000 fighters Boudicca had gathered, and after the initial successes new followers have been added (about 70,000 Romans lost their lives). The Roman general and governor of Britain, Gaius Suetonius Paulinus presented with two legions against the rebellious Britons, which led up to that guerrilla-like attacks, in a battle northwest of Verulamium in the open field and beat them devastating.

About the further fate of Boudicca there are two versions: Tacitus reports that Boudica’s life by taking poison took (Annals 14,37,3), Cassius Dio, however, thinks that Boudica fell ill and died.

Related to:
History of England