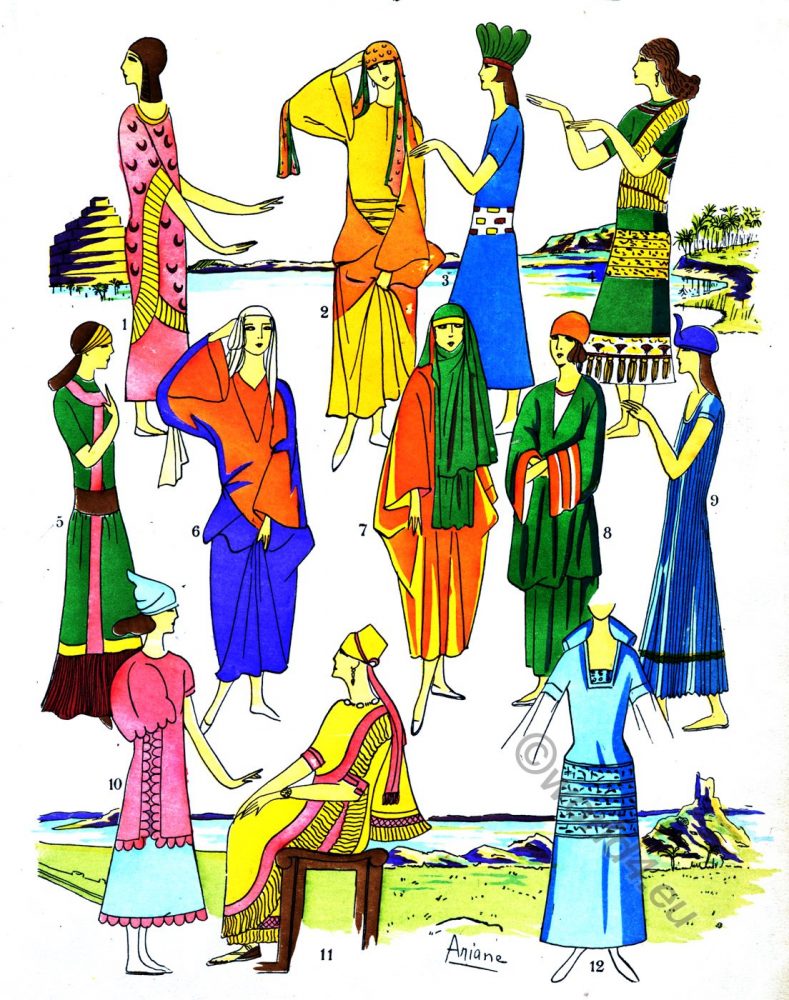 1. Pink gown with red embroidery; neck-trimming yellow, like that of the gown.
2. Orange-yellow gown. Orange and green veil. Orange trimming in front of the gown. (Jane Dieulafoy. Excavations at Susa. Jane Dieulafoy 1851 – 1916).
3. Blue gown. Girdle with yellow and red embroideries. Green and red coiffure.
4. Green and yellow gown, with green ground and yellow ornaments; red stripes in the lower part.
5. Green gown with pink and mauve stripes, brown belt, yellow band in the lower part and brown pleating. (From a statue.)
6. Excavations in the acropolis of Susa (plains of Chaldaea) by Dieulafoy. Yellow and violet gown. Orange veil. Light orange bodice; and rest of the dress violet.
7. Excavations at Susa, by Jeanne Dieuiafoy. Arab woman of the Cheik Hali tribe. Green veil and orange gown. Yellow band in the coiffure.
8. Capar of Loris workmen. Green gown adorned with orange bands on the sleeves; orange coiffure.
9. Blue gown trimmed with yellow bands round the neck, at the end of the sleeves, and at the bottom of the skirt, from Assyrian cylinders.
10. A. H. Layard, excavations. Blue coiffure; top of gown pink and bottom blue, adorned with pink indentations.
11. Yellow gown with pink and yellow ornaments.
12. Statue of Nebo found at Nimrud. Blue gown adorned with embroidered cuneiform signs.

ELEGANT WOMEN, AMAZONS. – Many periods of elegance have characterized the Assyrian and Babylonian or Chaldean dynasties. The two great cities, centers of production of articles of luxury, were Nineveh and Babylon, and in the three cuneiform inscriptions, Persopolitan, Median, and Assyrian, full details are found of the life and dress of the women of that time, while the researches of Botta and Lazard have brought to light actual images showing the dress of the time.

The rivalry existing between Nineveh and Babylon in commerce and industry, also led to a rivalry between the women of the harems, and the Amazons came with their warlike ardor to excite perpetual strife between the two cities. The women of Assyria being under the influence of warriors, civilization spread rather Southward, to Chaldea.

The Chaldeans took over the High Priest, and the costumes of the women are more hieratic in consequence. Wives of high officials knew through their husbands all the State secrets. The wives of drawers of horoscopes were the aristocracy of the nation, of which the principal person was the Arch-magician. The Hebrew prophets held them to be impostors, because, says Baruch, they took away from their Gods the gold and silver gifts, and the garments offered, and bestowed them upon shameless women whom they entertained. The Government was despotic, and only allowed its own officials to wear fine costumes.
These consisted mainly of a long tunic, with a fringe border, which from the waist to the ankle falls in a curve, and the fringe often ends in a number of rows of pearls, and a richly embroidered mantle. Earrings were worn, also bracelets on the arm, and the foot was gracefully shod in sandals. In the palace, the women were under the surveillance of the chief eunuch.

Embroidered belts were often worn at the waist, or scarves with fringes. Their hair was well dressed and curled with small irons, into waves. The most elegant women were the wife of the Chief Butler, that of the Governor of the Palace, of the Chief, of the Guard, of the Ministers of State, and of the Commanding General. They held the same rank as the wives of Consuls of the Roman Empire, or of the Athenian Archontes. Finally the wives of provincial governors, known as Satraps, who had the same rank as French Prefects.
In Chaldea, the elegant women were the wives of the great agriculturists; wool served for multitudinous purposes in their costume, and was supplied by the sheep of Assyria, already famous.

This industry was one of the most developed, the elegant women wore all kinds of stuffs of wool and linen in striking colors, embroidered with human or animal figures, sometimes symbolic, such as the unicorn. These stuffs were famous throughout the ancient world. The Babylonian factories were the most famous, but others existed, actuated by hydraulic power, along the Euphrates and the Tigris, especially at Borgippa, The workers made use of iron and steel plant, no doubt coming from the Caucasus. Artists also made vases decorated with various subjects, also many jewels, bracelets, and ear pendants, with pottery and clay vases of a rare elegance. They won fame by their cut precious stones, their carved ivories, and their ceramics, of which the influence is still shown in the mosques of modern Iran. The most beautiful remains of decorated furniture in fine taste came from the explorations of Dur Šarrukin (Khorsabad).
All the known plants and minerals were used in the coloring matter of the textiles.

Fine arts were highly developed in Babylon, but especially at Nineveh, as we have seen: architecture, sculpture, and above all, painting, were well advanced. In some paintings we see that the ladies of Nineveh, in the time of Sargon, stained their eyebrows, as do the women of France at the present time.

The influence of Assyrian art upon Greek art is considerable. The architecture of Persepolis and that of the Isle of Delos are similar. The bas-reliefs of Marathon recall those of Khorsabad.

The Hebrews penetrated into this country after the call of Abraham, and finished by dominating it, after Jerusalem had been taken by Nebuchadnezzar. This nation kept to the north of the Arabian Desert, partly in Chaldea, and partly in Assyria. A second period of prosperity then opened for the Jews, which continued from the edict of Cyrus until the taking of Jerusalem by Pompey. It was during this period that they passed successively under the yoke of the Persians, the Greeks and the Romans.
The Hebrews organized the school of prophets, teachers of the people; their wives were draped in ancient style, in voluminous cloaks of sombre hue, and are often depicted standing in the tragic attitudes of an oppressed people. They were thought to be magicians, but they were merely philosophers. Agriculture was their daily occupation, their industries being very weak.
When the day of prosperity dawned upon them, luxury increased, and their arts and crafts were vastly improved, but they were dominated by the Phoenician artists and artisans.

The clothing and toilette industries were considerably extended, and the women learnt to spin and weave the various textile products, not only for use in the house, but also for the market. The Bible mentions certain expensive cloths, such as embroidery and tapestry with patterns and borders of gold thread. The manufacture of stuffs gave rise to the art of the embroiderer and that of the dyer.
Manners and customs vary little in the East, hence the principal garments have always kept their pristine simplicity. Here are the various items of Hebrew costume: the rich tunics; known as the Epbod and the Mâl; over the rich cloaks were worn, two kind of overcoats, called Kaib and Addereth; the whole forming a sort of national costume; on their feet the women wore Achasin, a very amusing shoe adorned with little bells and metal plates, which clanked together as the wearer walked along. On the head was worn the Schebisim, a net bonnet, or turban. This headgear was worn on top of the veiled head when the wearer went out into the street.

Jewelry and perfumery were brought to a high pitch of perfection. Hebrew women were very fond of fine pearls and the artisans were very expert in mounting and engraving them. Bracelets, rings, anklets, and all the paraphernalia of feminine coquetry, which sometimes roused the wrath of the Prophets, were also manufactured.

This is the first time in the history of mankind that we find mention of the “purse”, a kind of little pouch which Hebrew women hung at their waists. These women were so coquettish, that special artisans were employed for the preparation of oils and ungents made from myrrh, cinnamon, aromatic herbs, cassia, galbanum and incense. The most important cosmetics were Pouch, or eye lotion, and Cophen, a light-colored powder for the nails and hair of these dark women.
The Book of Job gives us much information on the subject of Hebrew dress, telling us that gold, tin, silver and copper, were all used for purposes of personal adornment.
The close proximity of the Arabs and Phoenicians brought about an interchange of commercial relations. The literature and history of the Hebrew race is summed up in the Bible, where their hymns, poems or psalms, are all dedicated to the God Jehovah (Yahweh) … They were ignorant of the fine arts, except for music, of which they were the real creators. Their dances, always sober and decorous, always formed part of religious ceremonies.
Thanks to the Prophets, who, with their knowledge of the past and present, were able to cast a penetrating ‘eye upon the future, this civilization has lasted throughout the ages, and has exercised a considerable influence upon our clothing, habits, conventions, and even upon our ideas.

The hair of the Chaldean woman is waved upon the temples and drawn back to form a chignon; it is also covered by a scarf, one edge of which is folded over to form a narrow band round the forehead. This is an arrangement which the women of ancient Greece re-invented centuries later, under the name of Credemnos or mitre.
One is astonished at the regular features of the face; the big eyes are drawn almond-shaped, the nose straight, a delicate smile on the mouth, the chin firm, and the neck finely set off by the five-row necklace which surrounds it.

The Chaldean women were able to make, from a single shawl, various garments, suited, by their elegance, and by the nobility of their aspect, to people of a high grade of civilisation.