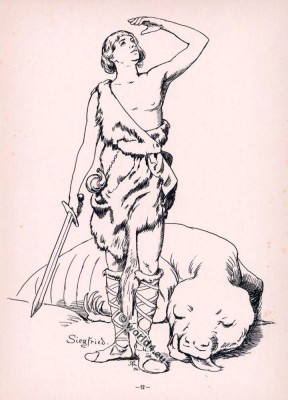 Siegfried in the forest.

Costume design for Siegfried in The Ring Cycle 1879.

Hans Thoma costume designs for the opera The Ring of the Nibelung. Opera by Richard Wagner.

Siegfried:
Wilder son of the Wälsungen* Sieglinde and Siegmund and thus the grandson of Wotan. Forging the sword Notung new, kills Fafner* and mime, wins the Nibelung treasure awakened Brünnhilde and takes her as his wife.
* The Wälsungen (also Wölsungen, Welsungen, Völsungar) are a legendary Germanic race, named after their ancestor. This will be for the first time in the Old English epic Beowulf (at least the 10th century, perhaps earlier), called as Wael.
* Fafner is, according to the Icelandic Völsungasaga the son of the Dwarf King Hreidmar. By using a powerful weapon and his fearless mind he guards the adorned with gems and shiny gold house of his father. He later turns out greed into a dragon. Siegfried kills him and thus win the treasure of the Niebelungen.