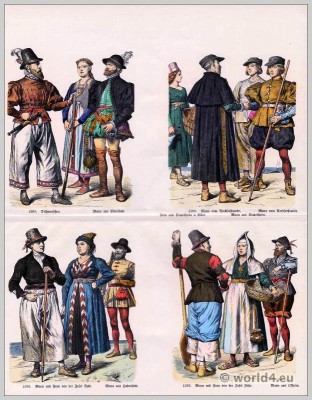 Costumes from Friesland in the 16th Century.

Costumes from Friesland in the 16th Century.

Top row left to right: Citizens in the clothing of Dithmar in 1590. Man in clothes of Eiderstedt. Right: Woman in the dress of Stadt Holm in the 1590. Man from the North Sea beach. Man in costume from Stapelholm. Man from the North Sea beach.
Bottom row left: Man and woman in costume he of the island of Sylt. Man wearing costume of Haderstedt. Right: Man and woman in costume it from the island Foehr. Man wearing costume of Ølholm.