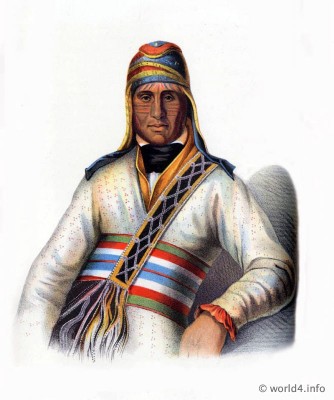 YOHOLO MICCO was principal chief of the Eufaula town, which lies between Tallassee and Oakfuskee, in the Creek nation, the Tallapoosa river running through it. In the war of 1813-14, he served with Mclntosh against the hostile Indians, and shared largely and honorably in all the battles that were fought. His bravery was equalled only by his eloquence, which gained him great distinction. He was the speaker of the Creek nation, as Opothle Yoholo was of the division called the Upper towns, and opened the councils on all occasions.

At the council called in 1827, by the Little Prince, to receive the propositions offered by the government through Colonel M’Kenney, which we have noticed in another place, Yoholo Micco explained the object of the mission, in a manner so clear and pointed as not to be easily forgotten by those who heard him. He rose with the unembarrassed dignity of one who, while he felt the responsibility of his high office, was familiarly versed in its duties, and satisfied of his own ability to discharge it with success. He was not unaware of the delicacy of the subject, nor of the excitable state of the minds to which his argument was to be addressed, and his harangue was artfully suited to the occasion. With the per suasive manner of an accomplished orator, and in the silver tones jf a most flexible voice, he placed the subject before his savage audience in all its details and bearings making his several points with clearness and in order, and drawing out his deductions in the lucid and conclusive manner of a finished rhetorician.

Note:  Portrait by the photographers Minya and Rudolf Dührkoop 1916

The deportment of this chief was mild, his disposition sincere and generous. He advocated warmly the principles and practices of civilized life, and took so decided a part in favor of the plan! to improve the condition of his people, proposed by the American government, and by individuals, that he became unpopular, and lost his place and influence in the general council, and the chieftaincy of his tribe. His successor as principal chief of the Eufola town is Octearche Micco.

Yoholo Micco was amiable in his family relations, and brought up his children with care, giving them the best advantages in point of education, which the country afforded. His sons were bred to the pursuits of civilized men. One of his daughters, named Lotti Yoholo, married a chief of the Eufalo town, and, following the example of her father, gave her children liberal educations. This chief visited Washington in 1826, as one of the delegates from his nation. He afterwards consented to remove to Arkansas, and fell a victim to the fatigues attending the emigration, in his fiftieth year, while on his way to the land of promise. His memory is honored by the Indians, who, in common with all who knew this excellent person, speak of him as one of the best of men.

The word Micco signifies king or chief, and will be found forming a part of the names of many of the southern chiefs, while Yoholo, which signifies the possession of royal blood, is an aristocratic adjunct to the names of those who are well descended.

Note:  Residents of Norton Sound of the Bering Sea, Alaska.