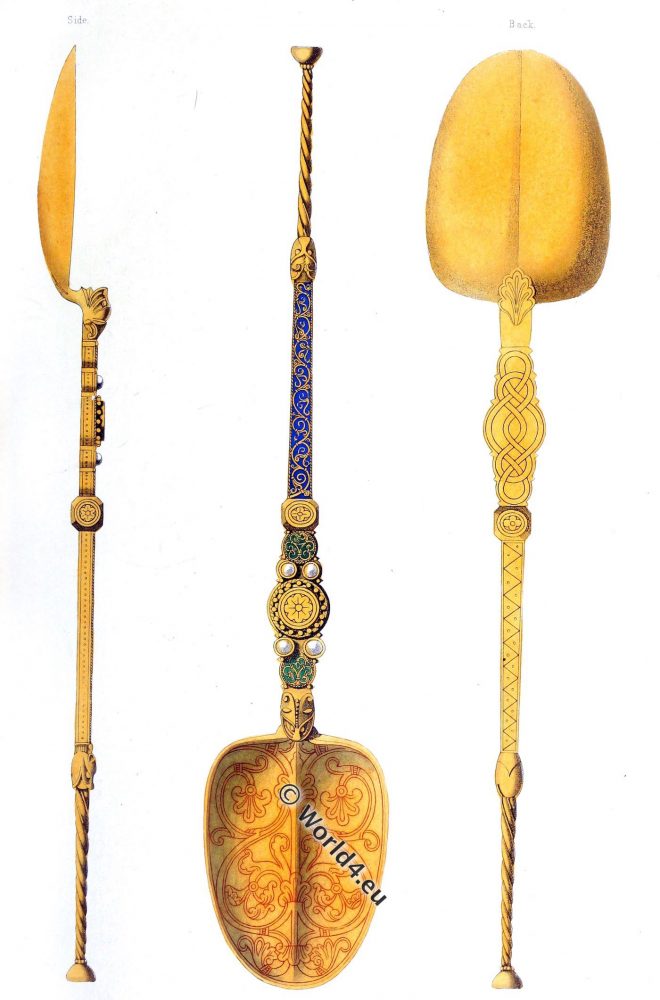 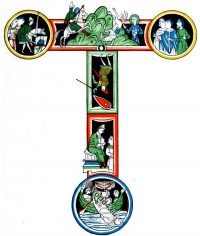 THE present engraving represents the Spoon which has most probably been used in the coronation of English monarchs since the twelfth century, and which is preserved among the regalia in the Tower of London.

Its style of ornament seems to prove that it was made at that period. It is of pure gold, with four pearls in the broadest part of the handle. The bowl, which is thin, has an elegant arabesque pattern engraved on its surface.

Unfortunately the enamel has been destroyed, either accidentally or willfully, but as the rough surface between the filagree work proves its former existence, it has been considered advisable to represent it in its original state. It is used to hold the oil for anointing the monarch at his coronation, and the bowl is divided, by a ridge down the middle, into two hollow parts, in which the archbishop, when officiating, dips his two fingers.

The ampulla, or vessel which contains the oil, is also of gold, in the form of an eagle, its head being loose and serving as a lid.

Sceptre, end of the 13th century of the imperial abbey of Werden, Germany.

The figure above represents a small sceptre, supposed to be of the latter end of the 13th century, which formerly belonged to the imperial abbey of Werden, but is now in the possession of Professor Mueller of Wuerzburg. It is made of bronze, gilt; the handle is surrounded by two spiral threads of silver, the space between them being also gilt.

The knob at the bottom, as well as the dog’s head at the top, are plated with silver, and ornamented with squares of black nielli. It has been observed that the dog’s head is frequently found as the heads of staffs, &c. belonging to ecclesiastics of the thirteenth century, in Germany; it is said to be emblematical of the spiritual order.