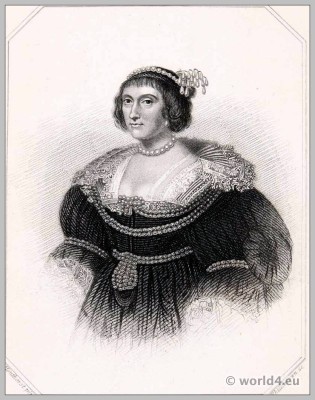 Elisabeth, Queen of Bohemia, Daughter of James the First, 1662.

Elisabeth Queen of Bohemia, Daughter of James the First, 1662.

Elizabeth Stuart (1596 – 1662) was Princess of England and Scotland, and by her marriage to Frederick V of the Palatinate, the Winter King, 1613-1623 Electoral Princess Palatine and Queen of Bohemia from 1619 to 1620. Because Frederick V was able to assert itself as a Bohemian king for a year, Elizabeth had to go with him into exile in 1621 in the Netherlands, where she lived for 40 years. Become a widow in 1632, she struggled in particular, that her eldest surviving son, Charles Louis, the Palatinate got back. But it was only in 1648, he received it on a reduced scale. After the restoration of the Stuarts in 1661 she could return to home, where she died the following year. The picture presents her as Bohemian queen. It was probably in 1635, made ​​in the Dutch exile after the death of her husband.

Free eBook: Memoirs of Elizabeth Stuart, queen of Bohemia, daughter of King James the First. Including sketches of the state of society in Holland and Germany, in the 17th century.