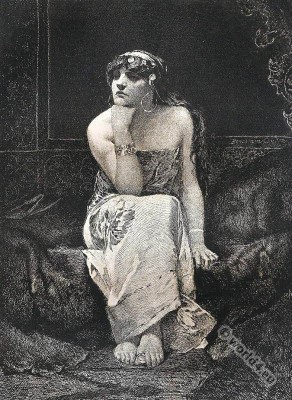 Herodias (8 BC to 39 AD). Divorced wife of Herodes Boethos. Mother of Salome.

Herodias. A Mirror of Fair Women.

Theodore Child, in “A Mirror of Fair Women,” published in “Harper’s Bazaar,” says: “The women of the Idumean family of the Herods are famous in history for their fatal charms and their insatiable ambition… . Herod Agrippa having been raised to the dignity of king by the Emperor Caligula, the jealous and always ambitious Herodias wished to be a queen also. She is represented as having worried and taunted Antipas until he finally conquered his natural indolence, and went to Rome to solicit the title which his nephew bad obtained. His petition, however, was not granted. Herod Agrippa intrigued against his uncle, and so Antipas was recalled and spent the rest of his life in exile, at one time in France, at another in Spain. Herodias folloued him in his disgrace for when Caligula exiled Antipas and gave his wife permission to return to her country, she refused the privilege, saying, with noble pride, that as she had shared the good fortune of her lord, she could not abandon him in his adversity.”
Yet this was the same Herodias at whose command her daughter Salome asked the head of John the Baptist.

“For John had said unto Herod, ‘It is not lawful for thee to have thy brother’s wife.’ And Herodias set herself against him, and desired to kill him; and she could not; for Herod feared John, knowing that he was a righteous man and a holy.”

Herodias (8 BC to 39 AD). Divorced wife of Herodes Boethos. From this marriage the daughter Salome emerged. Afterward married to Herod Antipas murderer of John the Baptist.