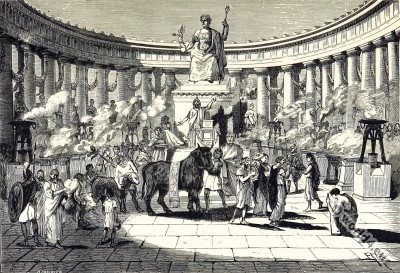 Gallic Roman temple in honor of Augustus in 1st century BC at Lugdunum.

Gallic Roman temple in honor of Augustus in 1st century BC at Lugdunum.

The Sanctuary of the Three federal Gauls (Tres Galliae) was a monument built in 12 BC by Drusus, nephew of the first Roman Emperor Augustus at Lugdunum (Lyon, France).
Emperor Augustus had cut Gaul into four provinces, three imperial, Lyon Gaul, Aquitaine Gaul and Belgian Gaul (Gallia Lugdunensis, Gallia Aquitania, Gallia Belgica), and a Senate (Concilium, Narbonne Gaul). Lugdunum was considered the capital of the Three Gaul as it was where imperial rulers, their governors settled. The ara (altar) was dedicated to Dea Roma and Augustus and its first high priest (sacerdos) was Caius Julius Vercondaridubnus, a Gaul of the Aeduan elite.
Drusus invited 60 aristocratic delegates from sixty Gallic nations, Galela Lugdunum (60 or 64 delegates), to the opening ceremony on the first of August (August 1 of either 10 BC or 12 BC ), which corresponds to the anniversary date of the taking of Alexandria by Octavian and also the same day was sacred to the Gallic sun-god Lugh.

This meeting took place at the federal sanctuary of the three Gauls on the hill of Fourvière. The delegates who formed a notable meeting called “the council of the Gauls” (Concilium Galliarum) were chosen by the Senate from their respective towns among the deserving Gallic aristocracy. The Council of Gaul had a religious function: to worship the gods of the Empire, Rome and Augustus and renew annually allegiance to the Protecting Power. The religious ceremonies consisted of sacrifices, processions, games, and poetry contest. It also had, moreover, a political and administrative role. The Board of Gaul communicated with the Roman Emperor directly, notifying it of the wishes and complaints of the Gallic populations.

The sanctuary was located on the hillside of la Croix-Rousse and was destroyed completely. The geographer Strabo describes it in these words “This is where we see the temple or sacred building, collective tribute of all the peoples of Gaul, erected in honor of Augustus Caesar: it is situated in front of this city at the junction of the rivers, and consists of a large altar, bearing an inscription of the names of the tribes, sixty in number; the same number of statues, each representing one tribe, finally another large altar or sanctuary”

The monumental altar was dedicated to Caesar Augustus by all the Galatae in common and its 50-meter base were made in marble. The names of the 60 (or 64) Gaul tribes are on the altar and each nation is represented by a statue. Two winged victories stand by their side, they are in gilt bronze and hold large palms and crowns of gold. They are placed on columns of red porphyry from Egypt terminated by Ionic capitals. These columns have been recovered in the eleventh century, sawed in half and now form the four pillars of the transept of the Basilica of Saint-Martin d’Ainay.