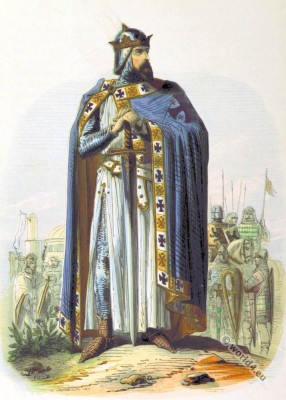 Godfrey of Bouillon also Godefroid de Bouillon; born 1060 – died in 1100 in Jerusalem, was a commander at the First Crusade; after the conquest of Jerusalem, he became the first ruler of the newly established Kingdom of Jerusalem, but rejected the kingship. Since Gottfried was the first ruler of Jerusalem, he was idealized by Christianity and later mythologized: he was named leader of the Crusade, King of Jerusalem and as the lawmakers who introduced trial by jury in Jerusalem. Since the 14th century he was considered as one of the ideal Knights, they were known as the nine good heroes. Nine heroes called a literary and art-historical topos which was first erected in the early 14th century in the French epic poem “Les Vœux du Paon” (1312) of the Lorraine poet Jacques de Longuyon from the courtly-chivalric milieu as a list of ideal knights. The nine heroes attracted as of Art History motif throughout Europe in the town halls and government offices in order to remind the councilors or officials of a “good government” (time-typical town hall iconography).

This group consists of:

Three representatives of the pagan antiquity: