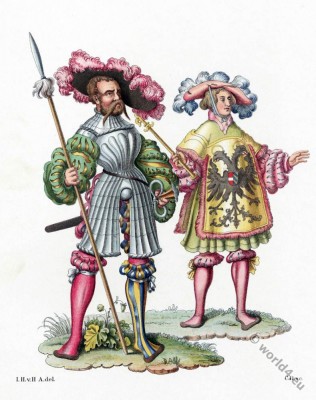 Chief among the foot soldiers and the imperial Herald from the first half of the 16th century. Colored pen drawings by Hans Holbein, Cabinet of Prints Dresden Germany. The former differs in its garb of the common lansquenets of that period, only by the beautifully half Harnisch.

So extraordinarily well the splendor and luxury of costume also was, it simply appears nevertheless if we compare it with the baggy breeches clothes that mercenaries and their leaders appear in the middle and in the second half of the 16th century.

The Herald carries on the front and rear part of the robe the two-headed eagle, which refers to the Roman-German imperial dignity; as a symbol of Germany alone the single-headed eagle was always applied; especially Maximilian I and Charles V have highlighted this difference at every opportunity. The eagle carries on his chest the divided coat of arms of the House of Austria and Burgundy.

The signs of the herald consists herein, as usual, only in Tabard and staff; otherwise no clothing according to the ordinary sections of the first half of the 16th century. During the war book by Leonhard Fronsperger the captain of foot soldiers and the herald on horseback appeared along with an exact description of what was their office.

Source: Costumes, art and utensils from the early Middle Ages until the end of the eighteenth century, after simultaneous originals of Dr. JH Hefner-Alteneck. Publisher of Heinrich Keller. Frankfurt a. M. 1879-1889.