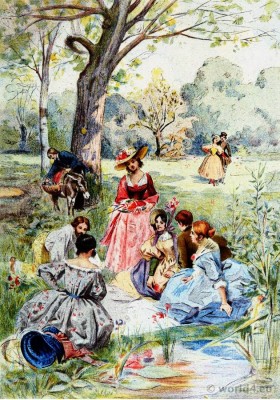 The Lionesses and Fashionables. French Second Empire fashion in 1842.

EVERY woman of fashion in 1842, at the time when Fréderic Soulié published Le Lion Amoureux and Charles de Bernard La Peau de Lion, was newly baptized by the dandies, who appeared to go to the Jardin du Roi for their models of bearing and elegance; it was nothing but Lionesses, Panthers, Tigers, and Rats; one might for an instant suppose oneself in a fashionable menagerie, such amiable complaisance was shown by our Merveilleux in the employment of these different expressions.

A Physiology of the Lion became necessary; it very soon appeared under the signature of Félix Deriège, with designs by Gavarni and Daumier. The author, in an introduction in biblical style, initiates us in the most ingenious manner in the world into the genesis of the savage king of the new Fashion. “In the beginning,” says he, “a crowd of charming creatures adorned the diverse countries of the elegant world. “And Fashion saw that a king was wanting to all these beings which her caprice had formed.” And she said: “Let us make the Lion in our image after our likeness!
“Let him have dominion over the Boulevard! “Let the Opera become his conquest! “Let him command in all places, from the Faubourg Montmartre to the Faubourg Saint-Honore.” And the Lion appeared. “Then he assembled his subjects around him, and gave to every one his name in the fashionable tongue. “He called some of them Lionesses—these were feminine beings, richly married, coquettes, pretty, who managed perfectly the pistol and the riding-whip, rode on horseback like lancers, prized highly the cigarette, and disdained not iced champagne.

From the Book: The Frenchwoman of the century; Fashions – Manners – Usages, by Octave Uzanne. Illustrations in water colours by Albert Lynch. Engraved in colours by Eugène Gaujean.