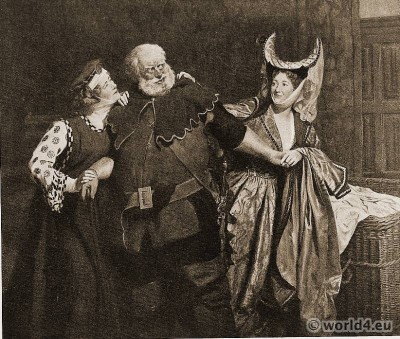 The Merry Wives of Windsor is a comedy by William Shakespeare from 1597. The comedy is about Sir John Falstaff, a drinking-addicted soldier. In complete overestimation of its effect on women he promises equal to several ladies marriage to her then to cheat their money. The ladies are amused by the wooing of the overweight drunkard and report therefrom each other. Thus, the dizziness is known, the ladies entice Falstaff into the trap and he eventually had to flee.

John Collier 1850-1934 was one of the most prominent English portrait painter of his time. He painted in the style of the Pre-Raphaelites and was one of the 24 founding members of the Royal Society of Portrait Painters, whose vice-president he was. He was also a member of the Royal Institute of Oil Painters.

The costumes are a blend of late medieval Burgundian court dress and English Tudor style of the Renaissance.