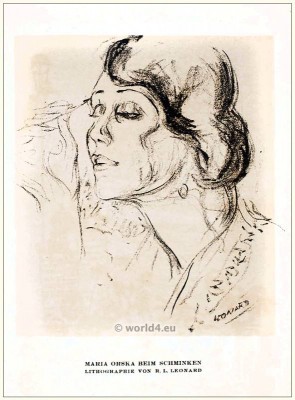 Maria Orska 1893-1930; (native Effi Rachel Blindermann) was a theater and cinema actress of Russian-Jewish origin.
She was discovered by the German actor Ferdinand Gregori in St. Petersburg and in 1909 brought to the Langer’s Conservatory in Vienna.
In 1911 she came to the Schauspielhaus in Hamburg, 1915 at Max Reinhardt’s Berlin theaters.
In Berlin, the exiled Russian was known as an interpreter of works by Strindberg, Wedekind and Pirandello. Since 1915 she also starred in silent films, repeated under the direction of Max Mack. However, the theater remained their main area of ​​work, especially the Hebbel-Theater, where they enjoyed in the twenties with their intellectually-aestheticized way of playing great popularity.

Maria Orska, who was with the Berlin banker Baron Hans von Bleichröder married, divorced 1925. She was a drug addict and committed in 1930 with an overdose of Veronal suicide.