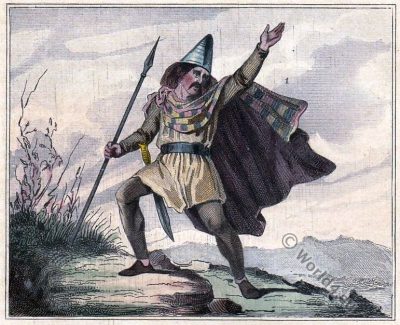 Leader of the Breton in 450

The Ancient inhabitants of France. Till B.C. 125.

WHAT we now call France or the “land of the Franks” was formerly termed Gaul,* the “land of the Celts,” a name at one time applied by the Romans to all the North and West of Europe, except Spain.

As they became better acquainted with Germany, France, and Britain, they omitted the first and last from this vague geographical division, and divided the rest into two unequal parts, one of which they called Cis-alpine, and the other Trans-alpine Gaul.

By the former they denoted the North of Italy; while by the latter they included Belgium and France with those parts of Holland, Germany, and Switzerland, which can be grouped with them, taking the Rhine, the Alps, and the Pyrenees as the natural boundaries. 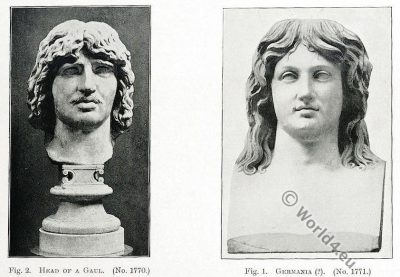 Head of a Gaul. Germania. Arthur H.Smith. British Museum. Catalogue of sculpture in the Department of Greek and Roman Antiquities. London, 1904.

Who were the original inhabitants of this vast territory nobody knows; but long before any historic record the Celts had formed settlements in the land; and in the time of Julius Caesar several other races had taken possession of different parts: For example, the Belgians occupied all that tract of country lying between the Seine [Sain] and the Rhine; the Aquitanians the south-west corner; the Ligurians and a colony of Greeks from Asia Minor, the south-east.

Of all the different races the Belgians were the most warlike. They resisted the Romans with great obstinacy, and were the first to throw off the imperial yoke. The Aquitanians were of Iberian or Spanish origin, and differed from all the other inhabitants of Gaul in language, customs, and physical peculiarity.

The Ligurians or Mountaineers were small in stature, but very daring, and lawlessly independent. They frequented the mountains, lived amongst the Alps, and straggled into Italy as far the Arno. The Greeks were a colony of Phocaeans who settled near the mouths of the Rhone, some 600 years before the Christian era, and founded Massali (now Marseille), which soon became a most flourishing city; extended its dominions over the barbarous tribes in the neighbourhood; and planted several colonies on the coast of Gaul and Spain. (Mas is a Provencal word of Latin origin and Salian is Celtic. Salian Mas, the residence of Salyens.)

Its naval and commercial greatness excited the jealousy of the Carthaginians, who made war upon it, but suffered a severe defeat. The Massalis cultivated the friendship of the Romans; and when the south-east corner of Gaul was made a Roman province, were allowed to retain their independence and constitution. They paid very early attention to literature and philosophy; and under the first emperors Massali became one of the chief seats of learning in Europe, to which the sons of many illustrious Romans were sent to complete their studies.

The Gauls or Celtic tribes thinly scattered about the middle regions south of the Seine were large in stature, of fair complexion, and red or flaxen hair. They were undoubtedly brave, and charged most desperately with their long swords; but failed in perseverance, and were easily conquered by a firm and obstinate resistance. It was a part of this vast family, but whether from France or Germany is not certain, that marched to Rome under the command of a Brennus;** defeated the armies sent against them; took the city; and burnt it to the ground (B.C. 389).
Having held possession of the ruins for six months, the warrior chief consented to withdraw his forces, upon receiving for ransom 1000 lbs. weight of gold. Probably he returned home with his booty; but the Romans, with their usual vaunting, assert that Camillus came upon him while he was weighing out the money, insisted on a fresh battle, slew him, and exterminated his whole army.

** About a century later another Brennus invaded Greece; was defeated near Delphi; and put an end to his life (B.C. 280.)

Source: THE POLITICAL, SOCIAL, AND LITERARY HISTORY OF FRANCE: BROUGHT DOWN TO THE MIDDLE OF THE YEAR 1874. THE REV. DR. COBHAM BREWER.