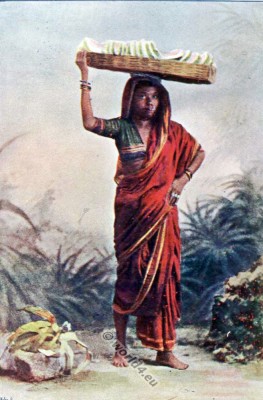 This picture represents a woman of the Kulmbi caste, who is not by any means to be confounded with a coolie. A very low caste woman would find but few purchasers for her wares, which, being edible, nobody would buy from a person whose social status was not considered sufficiently high.
The dress of all Hindu women is very similar in character, the chief difference lying in the texture of the garments worn. Those of the poorer classes are of colored cotton, and the outer garment, or sari, is first wound round the body in a fashion similar to that adopted by the men, but, unlike them, they then carry it over the back and head, forming at once a skirt, a bodice, and a covering for the head. The bracelets worn by the poorer classes of women are usually made of colored glass, and occasionally of silver, while silver rings frequently adorn their fingers and toes. The fruit sellers of Bombay of both sexes purchase their wares from the Arthur Crawford Market, which is one of the finest and largest in the East. It is under the care of the Municipality, and is exceedingly well looked after. There is a large central hall, over which is a clock tower; on the right, an avenue, measuring 150 by 100 feet, is devoted to fruits and flowers; the left, which is double that length, being reserved for vegetables and spices. A garden at the side of the market affords a space for several little shops, where poultry, parrots, minahs and other birds are on sale.

Note:  Ojira, To Her Lover, poem from The Garden of Kama.

The panels over the central entrance of the market, representing the various races of India, were sculptured by Mr. Kipling, the father of the well-known author.
Very little fruit indeed, with the exception of plantains, is grown in Bombay, the consequence being that it is comparatively an expensive item by the time the charges for freight and coolie hire have been added to the original cost of the fruit itself. Although not a very cheap luxury, there are many varieties when in season, the mango ranking among the most expensive and best appreciated. Pineapples are plentiful, and excellent oranges and sweet limes can be had nearly all the year round from Nasik or Nagpore; grapes there are also, but not good ones. Apples, too, from Kabul, but these too are only equal in quality to the grapes. Green figs, melons, and custard-apples are also to be bought in their respective seasons.