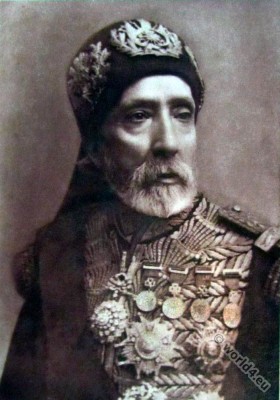 Mohamed Habib el-Bey from the Dynasty of Husseinite. Tunesia.

Habib Bey, Frenchified name of Mohamed Habib el-Bey, born August 13, 1858 in Bardo and died February 11, 1929 in Carthage, was Bey (Governor) of Tunis from the Dynasty of Husseinites from 1922 until his death. 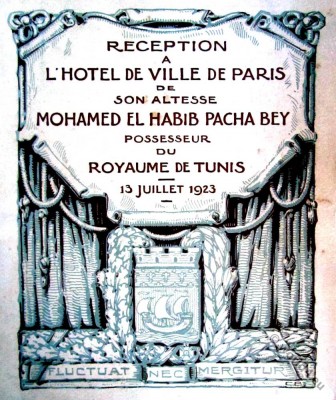 Reception at the Paris city hall of His Highness Mohamed El Habib Pasha Bey possessor of the kingdom of Tunis: July 13, 1923.

The only son of Prince Mohamed el-Bey Mamoune and a Circassian odalisque named Fatma Habib Bey. His uncle Sadok Bey takes care of his education and married him to the niece of the Grand Vizier Mustapha Ben Ismail, a favorite of the Bey and strongman of the regency. On 12 May 1906 he was appointed as Crown Prince and raised to the military rank of a Major, General Marshall.
Habib Bey inaugurates the Muslim Institute of the Paris Grand Mosque in July 1926. He was also the first Tunisian leader whose name replaces that of the Ottoman caliph on Friday prayers.

Note:  Charles I King of England, Scotland and Ireland from the House of Stuart.