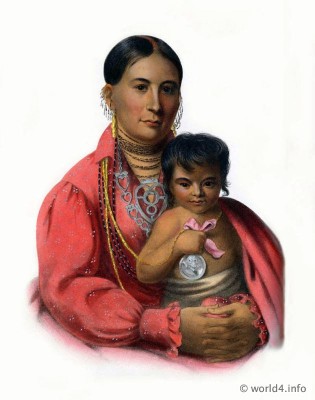 MO-HON-GO, an Osage Woman with her child

Mohongo, an Osage Woman with her child. Native American.

OF the early life of this female we know nothing; and, perhaps, little could be gathered that would be worthy of record. She is interesting on account of the dignity and beauty of her countenance, and the singular nature of her adventures since her marriage. She was one of a party of seven of her tribe, who were decoyed from the borders of Missouri, by an adventurer, whose intention was to exhibit them in Europe, for the purpose of gain. He was a Frenchman, and was assisted in his design by a half-breed Indian, who acted as interpreter between him and the deluded victims of his mercenary deception.

The Indians were allured from home by the assurance that curiosity and respect for the Indian character, would make them so welcome in Europe, that they would be received with distinguished. marks of respect, and loaded with valuable presents. It is not probable that they understood that they were to be shown for money, or that they had any knowledge of the nature of such exhibitions; but it is obvious that their own views were mercenary, and that they were incited to travel by the· alleged value of the presents which would probably be made them.
Whether any other arguments were used to induce these untutored savages to embark in an enterprise so foreign from their timid and reserved habit’>, we have been unable to discover. It is only known that the individual who seduced them from their native plains, assumed the character and dress of an American officer, and by, this deception gained their confidence; and it is more than probable, that as they only knew him under this disguise, they were deceived into the ·belief that he was acting under the sanction of the government. Whatever may have been the pretence, it was a cruel deception; and it would be curious to know what were the feelings and the reflections of those wild savages, accustomed to roam uncontrolled through the deep forests, and over the boundless plains, when they found themselves among the habitations of an enlightened people, the objects of intense curiosity, and the prisoners of a mercenary keeper. The delusion under which they commenced their journey was probably not dispelled previous to their arrival at New York; those with whom they met on the way, supposed them to be proceeding to Washington, on a visit to the President: and as the Indians were ignorant of our language, it is not surprising that this singular device escaped detection.

At New York the party embarked for Europe. They visited Holland, Germany, and some other parts of the continent, and at last came to the French metropolis. Here the imposture was detected. The pretended American officer had been at Paris before; he was recognized by his creditors, stripped of his borrowed character, and thrown into prison; while the wandering savages were so fortunate as to find a protector in Lafayette, whose affection for America was so great, that the native of our land, even though an illiterate Indian, was ever sure of a welcome under his hospitable roof. He supplied them with money, and caused arrangements to be made for their passage to the United States. During the voyage they were attacked by the small-pox, and three of them died. Among the victims was the husband of Mohongo, who was now left to carry back to her people, with the varied tale of her adventures, the bitter story of her bereavement.

The party landed at Norfolk, in Virginia, whence they were sent to Washington city. They were kindly received at the seat of government, where directions were given for their hospitable entertainment during their stay, and for their safe conveyance to the Osage villages. They reached their forest home in safety, and have done us the justice to acknowledge that, although they suffered much from the treachery of one of our race, who allured them from the wigwams of their tribe, they were indebted to the white man for many acts of kindness and sympathy during their novel and adventurous journey. They profess to have been on the whole gratified with the expedition.
The likeness which we have copied, was taken at Washington, by order of the War Department, while Mohongo remained in that city. It is a faithful and striking representation of the original; and the contemplation of it, to one acquainted with the Indian character, gives rise to a train of thought which it may be well to notice. The ordinary expression of the countenance of the Indian woman, is subdued and unmeaning; that of Mohongo is lighted up with intelligence. It is joyous as well as reflective. It is possible that this difference may be accidental; and that Mohongo adventured upon her perilous journey, in consequence of possessing a mind of more than common vigor, or a buoyancy of spirit, not usual among her tribe. But we incline to a different theory. The Indian woman is rather the servant than the companion of man. She is a favorite and confidential servant, who is treated with kindness, but who is still an inferior. The life of the untamed savage affords little range for the powers of reflection; his train of thought is neither varied nor extensive; and as the females are confined to domestic duties, neither meddling in public affairs, nor mingling in that which we should call society, the exercise of their mental powers must be extremely limited. The Indian village affords but few diversions, and still fewer of the operations of industry, of business, or of ingenuity. The mind of the warrior is bent on war, or on the chase, while the almost undivided attention of the female is devoted to the procuring and preparation of food. In the moments of leisure, when the eye would roam abroad, and the mind unbend itself in the play of its powers of observation, a monotonous scenery is ever present. They have their mountains and plains, their woods and rivers, unchanged from year to year; and the blue sky above them, subjected only to the varieties of storm and sunshine. Is it strange that the countenance of the Indian woman should be vacant, and her demeanor subdued?
Mohongo travelled in company with her husband. Constantly in his society, sharing with him the perils, the vicissitudes, and the emotions, incident to the novel scenes into which they were thrown, and released from the drudgery of menial occupation, she must have risen to something like the station of an equal. Perhaps when circumstances of embarrassment, or perplexing objects of. curiosity, were presented, the superior tact and flexibility of the female mind became apparent, and her companions learned to place a higher estimation upon her character, than is usually awarded by the Indian to the weaker sex. Escaped from servile labor, she had leisure to think. New objects were continually placed before her eye; admiration and curiosity were often awakened in her mind; its latent faculties were excited, and that beautiful system of association which forms the train of rational thought, became connected and developed. Mohongo was no longer the drudge of a savage hunter, but his friend. Such are the inferences which seem to be fairly deducible, when contrasting the agreeable expression of this countenance with the stolid lineaments of other females of the same race. If our theory be correct, the example before us affords a significant and beautiful illustration of the beneficent effects of civilization upon the human mind.