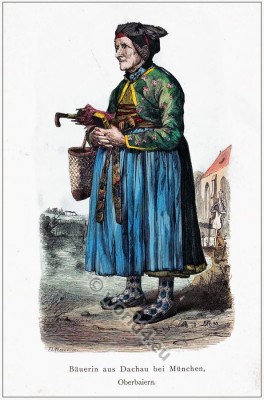 Peasant woman from Dachau near Munich

An old Peasant woman from Dachau near Munich on the way back from church. In hand she holds a prayer book, an umbrella and a handbag. These are the basic equipment of a farmer’s wife for sunday church, just a few years ago. The dress, original called “The Dirndl” is the original design during the period around 1850. That festive costume was worn only for special occasions. The apron in intense blue color.