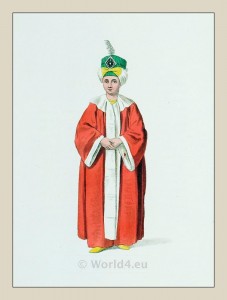 A young turkish prince, heir to the throne.

A young turkish prince, heir to the throne. Ottoman Empire.

MINORITIES are unknown in the Turkish government; in which also the Salic law is in full force. Neither sons, under a certain age, nor daughters, are raised to the throne. If the Sultan dies before his son bas attained a proper age, his brother or nearest relation assumes the government to the exclusion of his own offspring, who are then usually condemned to pass the remainder of their lives in confinement, unless they by chance afterwards ascend the throne. This was the case with the last Sultan, Abdulhamed, who, on the death of his brother Mustapha III. in 1775, was transferred from a prison to the throne, to the exclusion of his nephew, now the reigning Sultan. Abdul-hamed, however, was more liberal in his treatment of his nephew; and he both suffered him to be at liberty, and superintended his education. And Selim III. repays his uncle’s kindness, since his accesion by a similar treatment of his two sons, who were both minors at the death of their father. This plate is a portrait of one of them, who will succeed to the throne, if the present Sultan has no sons, or leaves them minors.