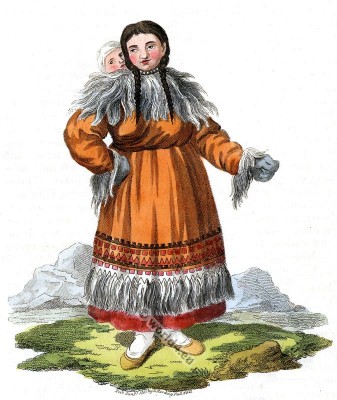 A Woman of Kamschatka in her Holiday Dress.

THE Kamtchadale seldom chooses a wife from among the females who dwell in the same hut with himself. He repairs to the one which contains the object of his affection, he solicits the happiness of labouring for her parents, and uses every exertion to give them a favourable opinion of his zeal and activity. If the lover is so unfortunate as to displease the parents and their daughter, he loses the fruits of his labour; but if he proves agreeable to them, he demands and obtains permission to touch his mistress; that is to say, to untie the strings of her jacket. But this is generally found to be extremely difficult; for the moment he obtains this permission, the object of his affection is placed under the safeguard of all the matrons dwelling in the same habitation; who make it their especial care never to lose sight of her, and to redouble their vigilance in proportion to the skill and activity of the lover. Besides this, the girl, who is never left alone for a moment, wears, on these occasions, two or three additional jackets, and is so over-loaded with garments, which are fastened upon her in every direction, that it is with great difficulty she can move about. Whenever she perceives her lover, she immediately screams out; the women run to her assistance, throw themselves upon the swain, and beat and scratch him in the most unmerciful manner; so that, instead of an expected conquest, he only carries off the bruises and scratches of his watchful antagonists.
It frequently happens that these efforts last for whole years, and are always attended with the same success. Often, after seven long years spent in fruitless endeavours, the youth is thrown by the females from the top of some balagan, or summer hut, and is lamed for the remainder of his life. But the lover, who at length discovers his mistress alone, or badly attended, cuts the threads of her garments, pulls off the bands which fasten them, and tears jacket, drawers, and every part of her dress, into a thousand pieces. He has then touched her; and she bears witness to her defeat by exclaiming, in a mild and plaintive tone of voice, Ni, ni.
The marriage is immediately agreed upon, and the lover is no longer deprived of the reward to which he is so richly entitled. On the following night he pays a visit to his bride in the quality of a husband, and on the day after he conducts her in triumph to his own habitation.