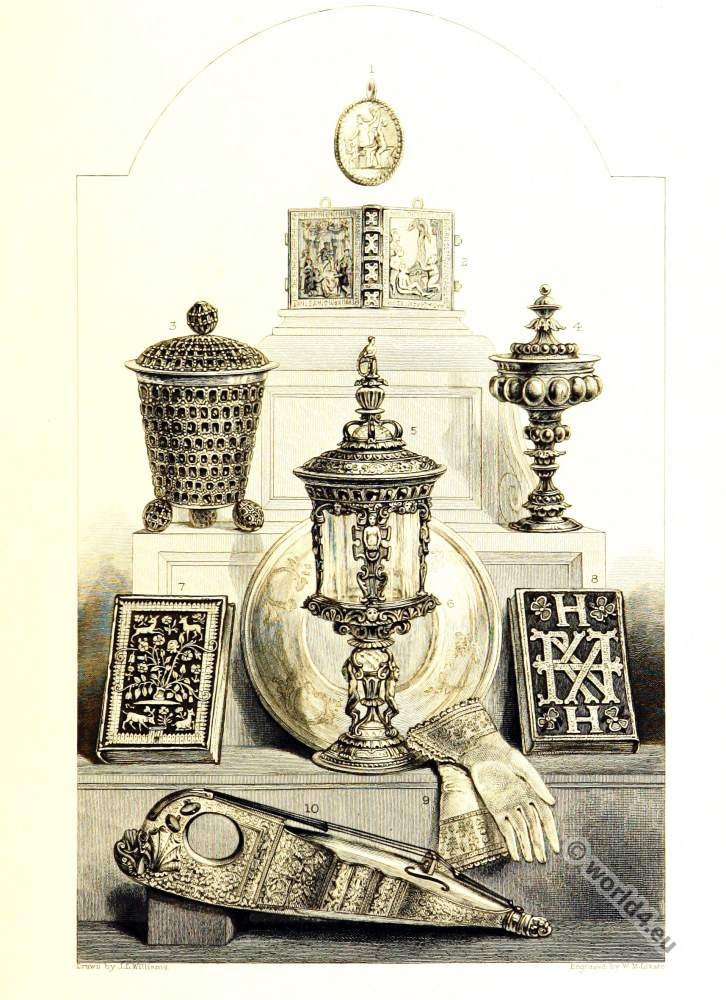 I. Jewel given by Archbishop Parker to Queen Elizabeth. 2. The Golden Prayer-book of Queen Elizabeth. 3. Cup set with Amethysts and Turquois. 4. Cup given by Queen Elizabeth to Bullinger, A.D. 1560; now preserved at Zurich. 5. Cup belonging to the Goldsmiths’ Company, said to have been given by Queen Elizabeth on her coronation to Sir Martin Bowes. 6. Dish of Glass supposed to have bee nused at the Christening of Queen Elizabeth, September 10th, 1533; in Dr. William’s Library, Red Cross Street, London. 7. Book in embroidered cover, presented to Queen Elizabeth by Archbishop Parker; in British Museum. 8. Book of Meditations and Prayers in Latin, French, and Italian, written by Elizabeth when Princess, and given to her father Henry VIII. The cover was embroidered by Elizabeth, and is a monogram of Henry VIII. and Katherine, with heart’s-ease at the corners. 9. Pair of White Linen Gloves embroidered with black thread; in possession of Syers Cuming, Esq. 10. Violin, said to have been given by Elizabeth to the Earl of Leicester; in the possession of the Earl of Warwick.

From the book: Pictures and Royal Portraits illustrative of English and Scottish History by Thomas Archer. London 1878.