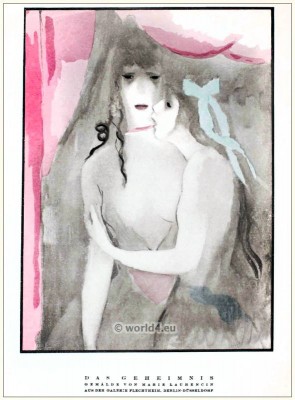 The secret. Painting by Marie Laurencin 1922.

Marie Laurencin (1883-1956) was a French poet and painter. Laurencin was known as a muse of the poet Guillaume Apollinaire.  Among her early supporters her mother and her drawing teacher were. At the Académie Humbert in Paris she met Georges Braque and made by him the acquaintance with Picasso and Guillaume Apollinaire. These were their other supporters, and soon she was involved in art-theoretical discussions that led to Cubism later.