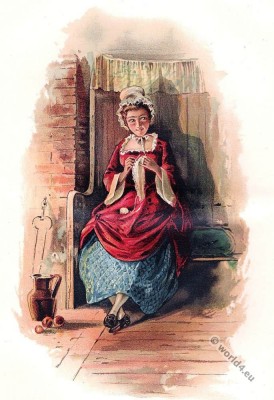 The Legend of Sleepy Hollow by Washington Irving.

The Legend of Sleepy Hollow by Washington Irving.

AMONG the musical disciples who assembled one evening in each week to receive the school-teacher’s instructions in psalmody, was Katrina Van Tassel, the daughter and only child of a substantial Dutch farmer, She was a blooming lass of fresh eighteen; plump as a partridge; ripe and melting and rosy cheeked as one of her father’s peaches, and universally famed, not merely for her beauty, but her vast expectations. She was withal a little of a coquette, as might be perceived even in her dress, which was a mixture of ancient and modern fashions, as most suited to set off her charms. She wore the ornaments of pure yellow gold, which her great-great-grandmother had brought over from Saardam; the tempting stomacher of the olden time; and withal a provokingly short petticoat, to display the prettiest foot and ankle in the country round.

Washington Irving’s “The Legend of Sleepy Hollow.” After E. A. Abbey, Artist

The saga The Legend of Sleepy Hollow, is a story of the American writer Washington Irving (1783-1859), which appeared in 1820 as part of his sketchbook. It is considered the first and still perhaps the most famous short story of American literature. Its origins, however, due to a German source, The Collected Rübezahl-tales by Johann Karl August Musäus. According to legend, Rübezahl is a moody giant or mountain spirit of the Krkonoše Mountains along the border between the historical lands Bohemia and Silesia. The mountain spirit man appears in a variety of shapes. In particular, he shows himself as a monk in ash-gray frock (like Odin with a veil), as well as a miner, craftsman and in a similar shape and trim, as well as in animal form, or as an object (tree stump, rock, cloud). Rübezahl is the Weather Lord of the Giant Mountains (Czech Krkonoše) and so resembles the Wild Huntsman. The Rübezahl Sagas act respectively in the Giant Mountains and the surrounding area. Single legends designate as a place of action specific villages and towns of the mountain range. The oldest evidence for the figure Rübezahl date from the second half of the 16th century, however, are derived from much older legends.

Movie: Sleepy Hollow with Johnny Depp, Christina Ricci and the marvelous Christopher Walken in the main roles, by Tim Burton