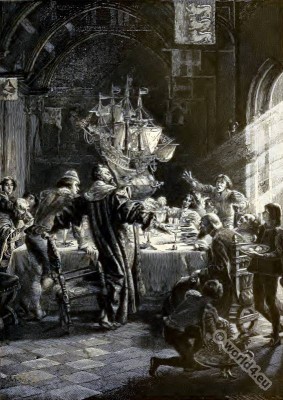 Christopher Columbus during a meal at Cardinal Mendoza in 1493

The Egg of Columbus

The Egg of Columbus is a phrase that describes an amazingly simple solution to an intractable problem.

Similar important is the Gordian knot. Originally, the anecdote of the egg of Columbus had been coined by the Italian artist Giorgio Vasari (1511-1574) on his compatriot Filippo Brunelleschi (1377-1446) . The connection with Columbus goes back to Girolamo Benzoni. He reported the anecdote in his book about the history of the New World (Historia del nuovo mondo, Venice 1565). Explains however, that he knew the thing just hearsay.

“When Columbus took his stand before the learned body, he had appeared the plain and simple navigator; somewhat daunted perhaps by the greatness of his task. But he had a degree of religious feeling which gave him a confidence in the execution of what he conceived his great errand, and he was of an ardent temperament that became heated in action by its own generous fires.
Las Casas, and others of -his contemporaries have spoken of his commanding person, his elevated demeanor, his air of authority, his kindling eyes and the persuasive intonations of his voice. How must they have given majesty and force to his words, as casting aside his maps and charts, and discarding for a time his practical and scientific lore, his visionary spirit took fire at the doctrinal objections of his opponents, and he met them upon their own ground!”

Washington Irving’s “A History of the Life and Voyages of Christopher Columbus”. Leo Reiffenstein, Artist

The old story of Columbus demonstrating to the council the possibility of making an egg stand on end is illustrated in the accompanying engraving. The action was in reply to the contemptuous observation of a fellow-guest that, since it was well-known that the earth was round, no genius was required to circumnavigate it, or to conceive the idea that there must be continents upon the other side. Columbus made no verbal rejoinder, but presently bantered his companions to make an egg stand on end. When the futile sport had been carried on for awhile, he broke the end of his egg and left it standing.